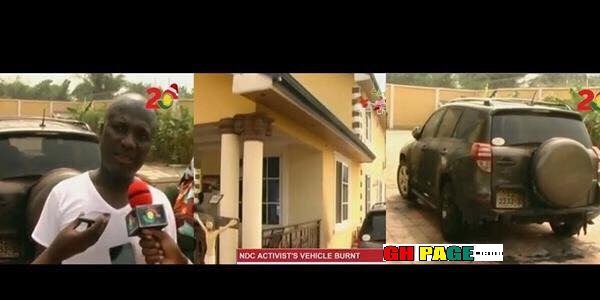 The house and a car of National Democratic Congress serial caller and supporter, Appiah Stadium has been destroyed by a fire outbreak in his residence at Ahenema Kokoben, a surburb in Kumasi, in the early hours of Monday, December 11, 2017.

Appiah Stadium in an interview on TV3 to confirm the incident, allegedly suspected the New Patriotic Party’s security wing, The Invincible Forces as the perpetrators of the fire.

The staunch John Mahama supporter told Ibrahim Abubakari,Tv3’s Kumasi correspondent, that he strongly believed in his assertion because of the support he was given to former president John Mahama.

He quickly denied the accusations that, he had intentionally put up the fire to gain some favors and popularity from his paymasters and supporters.

He called out the Invincible Forces for allegedly committing the act and said he was not going to stop supporting Mahama. He added that they had to eventually kill him to get him to ‘shut up’.