Your Butt Is Artificial, Don’t Use It To Disgrace Ghanaian Women – Maame Dokono Blasts Moesha In Latest Video 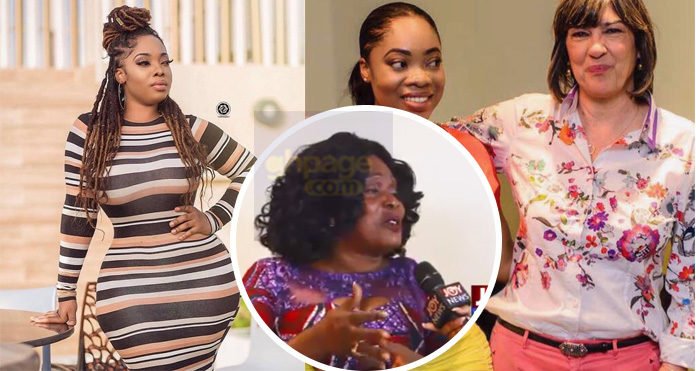 A couple of weeks ago, one of the major trending topics in Ghana was the interview CNN’s Christiane Amanpour had with Ghanaian actress and model, Moesha Boduong.

In the interview, Moesha Boduong stated that the only way for a lady like herself to survive in Ghana is to date a man who can take care of her even if it’s a married man. Moesha said:

“In Ghana, our economy is such a way that you just need a man to take care of you as a woman because you can’t make enough money as a woman in Ghana”. Moesha added that she is dating a married man who pays for her rent and provides her basic needs.”

Well, that video which sparked major controversy in the media and got everyone talking. After the full interview came out yesterday, veteran actress Grace Omaboe also known as Maame Dokono has also added her voice to the various critics saying Moesha has really disgraced Ghanaian women.

She stated emphatically that an actress does not need to exhibit her n*dity or curvature to be a good one.

“It is sad. You don’t have to show your body or exhibit your body to be a good actress. I don’t know but I will mention Moesha. To get the chance to be on CNN, instead of projecting Ghanaian women, you say that the women go to men to make money and this is all that Ghanaian women do. It is not true. For you alone to come out and say this doesn’t mean all Ghanaian women are doing it,” she said.

Maame Dokono further alleged that those men who buy such houses and cars the so-called mistresses are politicians and people of high positions in the government who uses stolen money to lure the girls into having s3x with them.

“And you know most of these men that give them money, they are politicians, they are businessmen who didn’t actually struggle to make the money, They got the cheap money to buy a car for a girl, buy a flat for a girl. The monies that they give to them, most are stolen money. monies that are stolen from the country,” she added.

READ THIS TOO: Photos: Upcoming Female Artiste Puts Her B00bs On Display

She also stressed on the fact that the only thing Moesha has is the fake butt she uses to secure all those mansions and cars from men.

“The only thing that she has that she is using to maybe lure these men is the butt but I think even that is artificial. What she said am so sad about it. It is artificial because I have seen and heard that she had to go through surgery for some parts of her body to be pushed to the back and she’s using that to bluff. Will that be there forever?” She quizzed.

READ MORE: Moesha Boduong’s Full CNN Interview Is Out And It’s More Damning Than We Ever Thought [Watch]