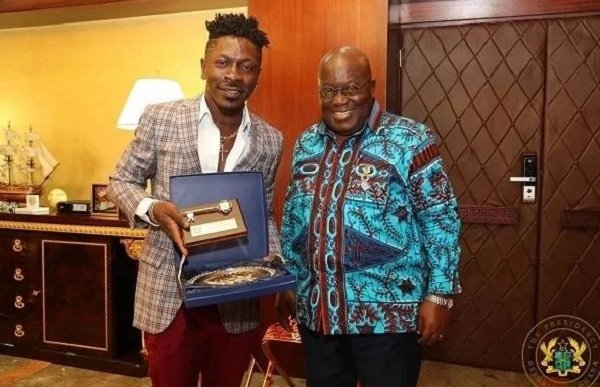 According to him, artists finding their way out with their aim of getting the president’s attention are dumb.

READ ALSO: Shatta Wale’s emotional letter to Terry Bonchaka on the 14th anniversary of his death will make you weep

The ‘taking over’ hitmaker speaking on Accra-based Kasapa FM, fired shot at some of his desperate colleagues saying it looks as if the president doesn’t have any work to do.

This follows the recent messages sent by  Stonebwoy, Samini, and other top Ghanaian artistes across social media seeking an invitation from the president.

READ ALSO: Tiwa Savage Accused Of Joining ‘The Illuminati’ After Throwing Up Hand Sign at Her Concert

He further disclosed that the official arrangement to meet the president was well documented and executed by the Chief Executive of EIB Group, Nathan Kwabena Adisi aka Bola Ray.

“Recently the president was under the public critics for replying to my message in pidgin language but to me, nothing was wrong with that. The day the president replied my tweet on my birthday, I was really surprised, I said to myself that wow this man is really good and knows what he’s about”, he said.

He added that “I quickly called Bola Ray to help me with the documentation to visit the Flagstaff House. I told Bola that this is too big because I’m not good with documentation. God, being so good we visited H.E. Nana Addo.

READ ALSO: Mahama Has Been Ignoring My Calls Since He Lost 2016 Election – Shatta Wale

The president on the 17th October tweeted  Shatta Wale and wished him a happy birthday and also presented a gift to him when he visited him at Flagstaff house.

YOU MIGHT SEE:[Photos]Peace at long lost as Shatta Wale and Samini settle beef- Bola Ray made it happen