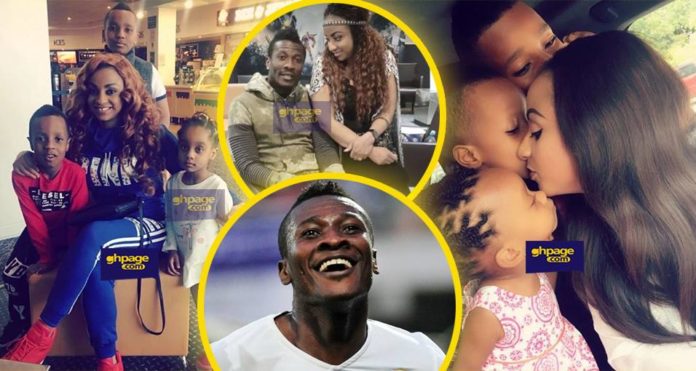 Ghpage.com has sighted reports on multiple news portal alleging that the Captain of the Ghana Black Stars, Asamoah Gyan has filed for divorce from his legitimate wife, Gifty Gyan. Not only that, Asamoah Gyan is demanding for a DNA test to be conducted on his 3 children to determine the real father of the children.

According to the report, Asamoah Gyan filed for divorce in August 2018 and he claims the 3 children with Gifty are not his children. But to be sure, he is demanding for a paternity test.

In the meantime, Asamoah Gyan has reportedly been linked to a wealthy businesswoman whom he is set to marry in the coming days if his petition for annulment of their marriage is agreed to by the court.

Asamoah Gyan has been spotted several times with the woman and has some instances been announced as the wife of Asamoah Gyan. It happened when Asamoah Gyan opened his new sports bar located in Osu, Accra.

Again she was mentioned as the wife of Asamoah Gyan when Emmanuel ‘Game Boy’ Tagoe fought his last bout in defense of his IBO World title this month.

SEE ALSO: After 4 kids, my husband is planning on marrying my sister – Wife reveals

But when queried this woman claimed Asamoah Gyan is her business partner. She claims she owns a property that houses one of Gyan’s companies.

Interestingly, there are reports that Asamoah Gyan’s elder brother, Baffuor Gyan forcefully seized Gifty Gyan’s passport to prevent her from traveling to the UK where she stays in one of Asamoah Gyan’s houses.

It is not clear what has caused Asamoah Gyan whose life has been riddled with one scandal after the other to firmly decided he is not the father of his 3 children after 8 years of marriage. Before marrying in 2013, Gifty and Gyan had been together since 2003.

Ghpage.com is following the news and will report back with more details. Stay with us.

SEE ALSO: Jon Benjamin reveals he is the Godfather of Shatta Movement