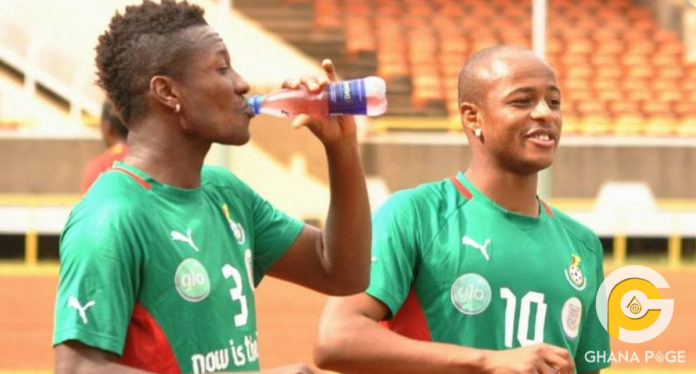 Former Captain and current General Captain Asamoah Gyan has finally commented on his removal from role as captain of the Ghana Black Stars and ‘promotion’ to a rather redundant role of General captain.

It would be recalled that the ‘elevation’ to the role of General captaincy caused him to retire from the National football team out of resentment. He however rescinded on his decision after a presidential intervention

Fast track to now, it appears that the football star feels somewhat betrayed by André Dede Ayew for accepting the the captaincy role especially since he considers Dede as a friend.

Addressing this issue in an interview after the Black Stars’ rather untimely exit at the recently ended AFCON tournament. He said;

” I don’t want to say things but it’s okay. A captain is a captain. What is ‘General Captain’? I don’t understand its meaning even now”

He was then quizzed if he would have accepted the role if he were in Dede Ayew’s shoes he said;

” If I were Andre, I would not have accepted the captaincy. But he’s human. People had expectations of him. Andre is a good guy so I don’t blame him. I have a good relationship with Andre. We’ve never fought. We discuss even business ideas. When we’re in camp, we share a lot of things but outside camp, he has his friends; I have mine.“

It is obvious that Asamoah Gyan feels somewhat betrayed by Dede Ayew’s acceptance of the captaincy band as according to him, they have a good relationship so he expected him to turn the role down for the sake of their relationship.

Asamoah Gyan however seems to have forgotten how he willingly acccepted the captaincy when coach Kwesi Appiah took the captaincy title from John Mensah making John the General Captain. Now, he has suffered the exact same fate and is being judgy.

If he could accept the role of captaincy six years ago forcing John Mensah to become General captain, why should Dede Ayew not accept not the role when it was also offered to him. As they say, what is good for the goose is equally good for the gander.