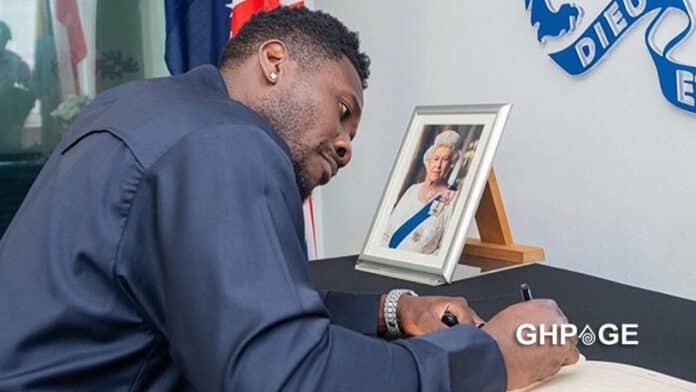 Asamoah Gyan has joined the queue of high-profile personalities in Ghana who have signed the book of condolences for Her Majesty Queen Elizabeth II.

This makes Gyan the first Ghanaian sportsman to pen his signature in the book opened in memory of the late British monarch at the British High Commission in Accra.

The former Sunderland forward and Ghanaian International signed the book in the presence of the High Commissioner, Harriet Thompson.

Gyan later put out a statement on Twitter: “On behalf of my family, the football family, and my fans, I signed the book of condolence for the demise of the Great Queen.

“Wishing the United Kingdom and the Commonwealth my deepest condolence, May the late Her Majesty Queen Elizabeth II Rest In Perfect Peace! Amen. @ukinghana.”

She was the longest-reigning monarch in the history of Britain, having ruled over 14 other commonwealth nations for 70 years.

Her funeral is slated for Monday, 19 September.