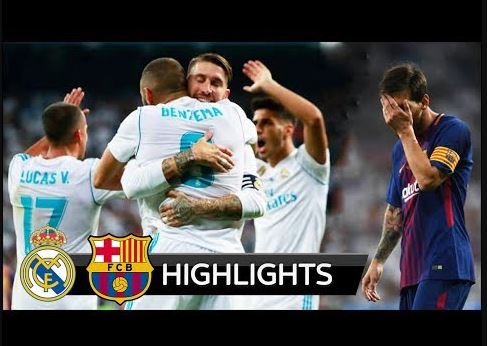 Real Madrid looked unstoppable in their capture of the Spanish Super Cup.

Despite facing their fierce rivals Barcelona, the two-leg El Clasico clash was one-way traffic. Los Blancos romped their way to an emphatic 5-1 aggregate win, having claimed a 2-0 victory at the Bernabeu.

Cristiano Ronaldo wasn’t available for part two of the competition having been sent off at the Nou Camp for two yellow cards. However, in his absence, Marco Asensio rose to the occasion.

The Real Madrid star, 21, scored a brilliant goal to seal victory over Barcelona in Sunday’s 3-1 victory in the first leg of the Spanish Super Cup and he was at it again in the second leg with an ever better effort.

The Spaniard received the ball 30 yards out and, with nobody closing him down, decided to let fly.

And he’ll be glad he did, his left-footed effort soaring beyond Marc-Andre ter Stegen and into the top corner.

READ ALSO:This Is What Lionel Messi Said When He shouted At Sergio Ramos After The Defender Threw Ball Over His Head

Real can certainly be confident that, when Cristiano Ronaldo eventually leaves, they have a player capable of filling his boots.