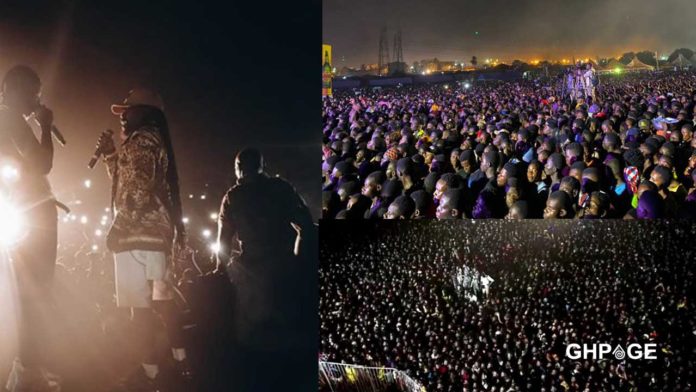 Ghana rap sofo Obrafour last Saturday made an appearance at Stonebwoy’s Ashaiman to the World concert and has declared it as the biggest outdoor event he has ever been to.

Obrafour, after mounting the stage and looking at the crowd that had gathered for the event had this to say.

“I’ve been to many outdoor events but trust me, this Stonebwoy’s Ashaiman to the World Concert is the biggest outdoor event i’ve seen, what a crowd’, he said.

See the photos of the crowd below:

For 6 years consistently, dancehall act, Stonebwoy made it a point to entertain his fans at the Ashaiman To The World and it was exactly what happened as the likes of Sarkodie, Shatta Wale, and others came on stage to ginger the crowd up to the max.

Another enviable record was set this year and it seems the whole of Ashaiman and the lovers of Stonebwoy really wanted to prove a point.

The managing director of Despite Media, Fadda Dickson who is known to be the right-hand man of Dr. Osei Kwame Despite is...
Read more
Entertainment

Today was the final funeral rites of the Favorite Mc’s MC, Kwadwo Wiafe of Despite Media who died a few weeks ago
Read more
Entertainment

Vera Hamenoo-Kpeda, famously known as MzVee has been in the Ghana Music industry for almost a decade and has had a lot...
Read more
Entertainment

Sad scenery as mother, Kwame Despite and others mourn Kwadwo Wiafe

Among the many celebrities that have passed within the last five weeks is Kwadwo Wiafe and the family, friends, and sympathizers mourn...
Read more
Entertainment

29 pastors nearly slept with me, leave Kennedy Agyapong to do justice to false pastors-Yaa Nikki

A young lady named Yaa Nicky claims that 29 pastors almost sept with her, so Kennedy Agyapong ought to be left undisturbed...
Read more

Today was the final funeral rites of the Favorite Mc’s MC, Kwadwo Wiafe of Despite Media who died a few weeks ago
Read more
Lifestyle

A popular Nigerian pastor has been caught red-handed by the woman's husband and other relatives. The man of God...
Read more
News

Popular Ghanaian socialite, Hajia4Real has through her lawyers ordered the Ashanti Regional NPP Chairman, Chairman Wontumi to apologize to her within 24...
Read more
Entertainment