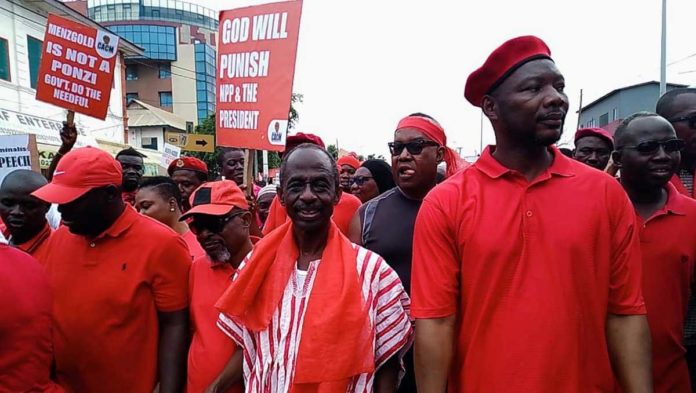 The demonstrators converged at Obra Spot at the Kwame Nkrumah Circle Interchange and roamed through the streets of Accra expressing their displeasure against the government.

However, executives of the National Democratic Congress (NDC) were present at the demonstration also complained about the severe economic hardship Ghanaians are facing under the Akufo Addo led government.

Asiedu Nketia, Samuel Okudzeto Ablakwa, Sammy Gyamfi and other NDC executives were seen wailing uncontrollably on the floor at the demonstration.

According to them, they are no longer safe in the country, their businesses are collapsing and can hardly fend for themselves.

“We are living through a government of contradictions where the President promises to secure our beds and yet you have Ghana’s bed being subjected to the worse rape ever in the 4th republic.

You have a government that has promised to make sure that contracts are properly awarded and yet procurement under this government is the worst ever”, Asiedu Nketia stated.

The demonstrators were all clad in red with inscriptions like ‘BRING BACK MONTIE FM’, ‘WHERE ARE THE FACTORIES’, ‘WE ARE SUFFERING, KUM Y3N PREKO’ and several others.

Actor John Dumleo who is a strong supporter of the NDC and scores of Ghanaians were present at the demonstration.

Also, some distressed customers of Menzgold were at the Kum Y3n Preko demonstration demanding for the release of the CEO, Nana Appiah Mensah over their locked up cash.