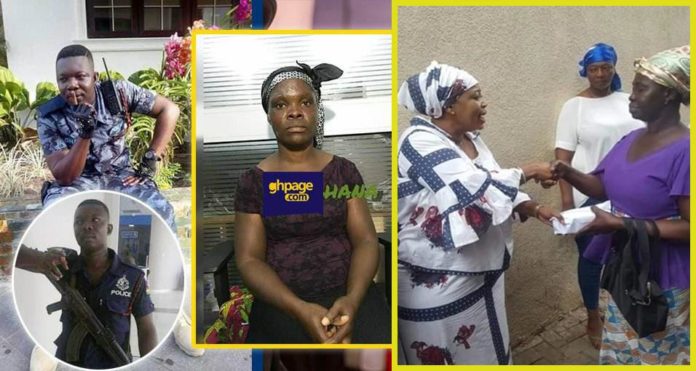 Madam Patience Sarfo, the woman who was assaulted by the police officer on duty at Midlands savings and loans in Accra has received an amount of GHC 40,000 as a cash donation.

Last Friday, a video which has now gone viral popped up where a police officer identified as Lance Corporal Fredrick Amanor assaulting Madam Patience who had by then gone to the bank to withdraw her savings.

In the video, Corporal Amanor was beating Madam Patience and not even the cry of a 7-weeks-old baby being carried by madam Patience could stop him from taking out such act against the woman.

Upon insisting, the police officer was called to drive the woman out of the banking hall. The one minute-twenty-seven seconds (1:27) video which was apparently recorded by an onlooker captured the policeman abusing the lady, first hitting her with an umbrella and then later countlessly slapping her on the face, before dragging her out.

This made Ghanaians angry as to why a police officer who has swore to protect the public is rather assaulting them.

Reports suggest that she has received cash donations amounting to GHc40,000, as well as foodstuff and clothing.

Further reports also claim that Peace FM and the Despite Group have offered her an apartment and shop.

Also, NPP National Women’s Organiser Kate Gyamfua donated rice and other foodstuffs + ?5,000 cash to the woman who was assaulted by the officer in uniform.

SEE MORE: The policeman is an illuminati because he is friends with John Dumelo – Evangelist Addai