Audio+Details: Ernest Opoku Dated And Even Had An Ab0rtion With Criss Waddle’s Ex Mary – Nayas 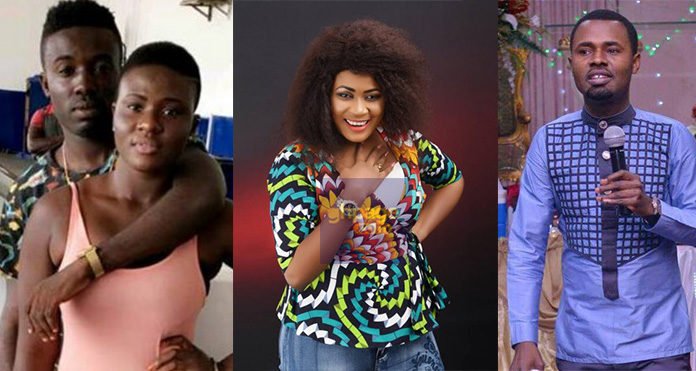 We reported on 23rd April 2018 that a renowned Gospel musician in Ghana has gone to the extreme of not only been cheating on his wife with a certain renowned actress but has gone ahead to impregnate her.

According to the popular Ghanaian actress, the gospel singer after getting her pregnant aside his wife pleaded with her to abort the unwanted pregnancy because as a “minister of the gospel” who wins souls for Christ, his reputation and credibility are very much at stake.

The actress who was afraid of losing her life through the abortion decided instead to keep the baby but connive with the doctor to pretend she went through with it after the gospel singer had promised to compensate her with GHS5000 and 15 pieces of GTP cloths to abort the illegitimate child. What a world we live in right?

Well, the said Gospel musician is our very own Ernest Opoku and the actress is Gladys Mensah Boaku, a.k.a NAYAS.

NAYAS 1 is also the same person who said in an interview that, she cheated on her old-man boyfriend because he was starving her with sekz and that she was even proud to do that–Well, we guess Ernest Opoku was the person she settled with.

The Gospel musician who’s alleged to have had a secret abortion with Criss Waddle’s Ex-Girlfriend, Yaa Mary, decided to repeat the abominable act this time around victimizing the well-endowed actress, but all his efforts proved futile after the actress failed to take the abortion drug Ernest Opoku bought for her.

“Do you think am Criss Waddle’s girlfriend whom you committed ab0rtion with?” she quizzed.

“Because she was young and had less knowledge about ab0rtion, you succeeded in having your unborn fetus ab0rted. Am a woman of 33 years and not like Yaa Mary(Criss Waddle’s ex). You cant lure me into having another ab0rtion,” she said.

READ MORE: This Video Of Stonebwoy ‘Chopping’ Love With Dr Louisa Will Definitely Make You Jealous

“What did you expect when you were having s3x with me? Was your thought to impregnate me and have ab0rtion with me right? Am keeping the pregnancy,” she added.