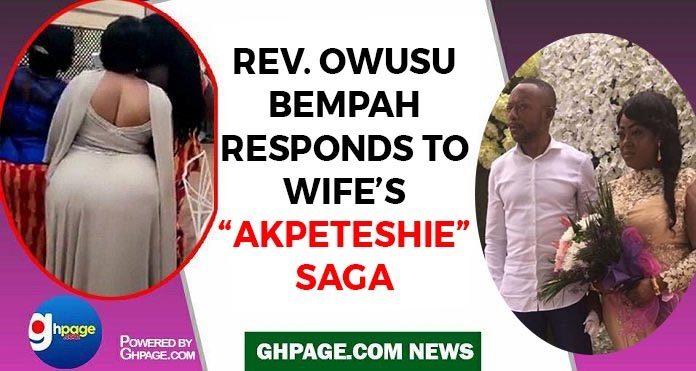 In some seconds video which was spotted on social media by Ghpage.com, the newly wedded spouse of the ‘man of God’ was captured asking a lady to serve her with a liquor stored in a container right after the lady had taken her share of the drink.

READ ALSO: 26 Married Ghanaian men reveal why they cheat in their marriage – One is in a gayy relationship

The lady then poured some of the drink believed to be locally made brewed alcoholic liquor ‘Akpeteshie’ and asked Rev Owusu Bempah’s wife, “Is it Okay?”

The then bride not happy with the level of the ‘Akpeteshie’ poured in the cup said, “No add some more” but the women in the room seeing the (Reverend’s wife) ‘Osofo Maame’ taking much of ‘Akpeteshie’ shouted with a big surprise “Eeeiii Osofo Maame!”

READ ALSO: I have used over 500 girls for prostitution – Sakawa Man confesses

But the founder and leader of Glorious Word and Power Ministries International, Prophet Isaac Owusu Bempah has denied media reports that his wife was caught ‘akpeteshie’.

Explaining the incidence to the general public on Accra-based Neat FM, he stressed that alcohol is something his wife Abena Animah hates and has never tasted before.

“My wife doesn’t drink alcohol; in fact, she hates it and has never tasted it before. I decided not to pay attention to this false report because it’s unnecessary. On that fateful day, my wife neither drank nor ate anything alcoholic”

READ ALSO: Here Are The Stories Behind All The 3 Women Prophet Owusu Bempah Has Married And His 2 Divorce Stories

“The ceremony was supposed to come off in the morning but because of some issues, it had to happen in the afternoon and because we had it in the afternoon, I told my wife to eat something before but she declined and said she would prefer a soft drink and so the drink she took that day was grapefruit drink and after she tasted it she asked for more because it was sweet and that is why people around her were surprised and not because she drank alcohol”, he said.

READ ALSO: Donald Trump Sued By P0rn Star He Had An Affair With Just After His Wife Gave Birth