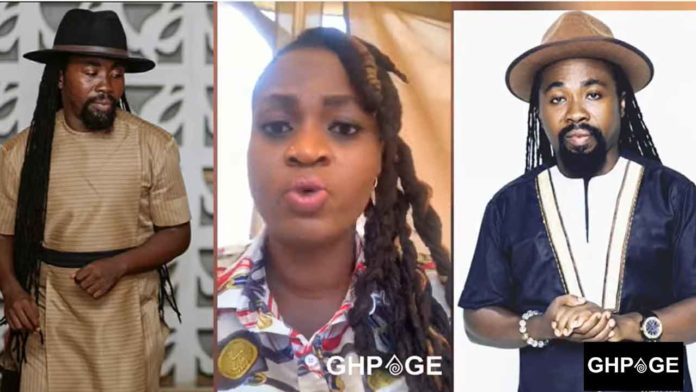 Stonebwoy’s ardent supporter, Ayisha Modi has dared legendary hiplife musician and rapper Obrafour to file a lawsuit against her if indeed he is a man.

In a video sighted by GhPage.com, Ayisha Modi stressed that she invested a huge sum of money in Obrafour’s musical project.

She revealed that around June 2009, Frank Agyekum who was the manager of Obrafour contacted her to ask for financial assistance for Obrafour’s album.

Ayisha Modi explained that she was the one who shot the video for ‘Kasiebo’ and not Big Ben as reported by Obrafour.

Ayisha popularly known as She Loves Stonebwoy disclosed that she also bought five laptops for Obrafour under the same project.

She further threatened to summon Obrafour to the Ga Traditional Court to swear on his life if she (Ayisha) didn’t invest money in his project.

“If you are a man sue me, evidence don’t lie. I shot ‘Kasiebo’ video, Big Ben bought the copyright of the song. He didn’t produce the album, Obrafour should come out and say otherwise.

I invested in your project because I believe we don’t have to celebrate people when they are dead. You and your management team issued a useless statement. Let’s hit the court and I will win”, Ayisha Modi angrily stated.

She Loves Stonebwoy also backed her claims with email evidence which shows that she assisted Obrafour financially.

This comes after Obrafour, and his management team issued a press release indicating that Ayisha Modi claims that she invested in his album are false.

Sarkodie would be shot to death – Ibrah One