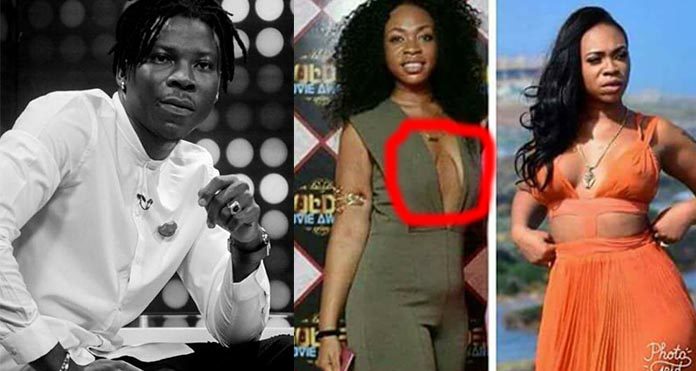 Shatta Wale has gone on a crazy rant on Facebook against Stonebwoy in which he’s dished out his nastiest and meanest insults ever.

He branded Stonebwoy greedy for wanting to ‘chop’ all the Zylofon money alone and he has once again slammed him as a selfish individual.

Stonebwoy recently said in an interview that he believes musically and lyrically he’s better than Shatta Wale and that the self-acclaimed Dancehall king is a comedian and can’t even play live band for 10 minutes. Since then Wale has been blasting Stonebwoy.

“Ur one knee pad like kanda overpass n u there saying u be good pass me, eeeeiiii Ewiase!!! Fame make ppl talk like they came from a d***…….why u sef inobe woman deh ur side or u be batty…”, he wrote.

READ THIS: Shatta Wale is just an empty barrel and a noisemaker – Ghanaians in Australia blasts Shatta Wale

The comment which didn’t go down well with a Bhim Nation fan on Facebook saw her pouncing on Shatta Wale.

Nana Ama Burniton used the opportunity to diss Shatta Wale and his girlfriend by comparing the breasts of Shatta Michy to that of 1993 Opel seat belt.

“You too your baby mama’s breast like 1993 Opel seat belt. Thank God for plastic surgery but don’t forget plastic melts,” her comments read.

READ THIS TOO: Man Caught His Fiancee In Bed With His Chosen Best Man 3 Weeks To Their Wedding 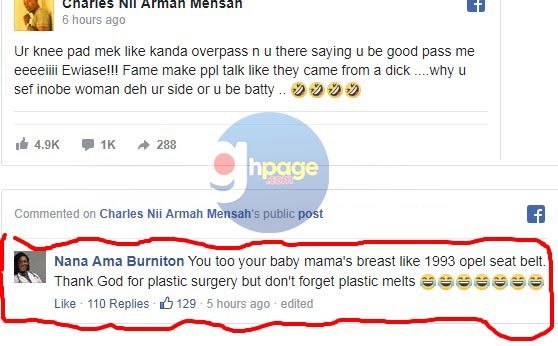