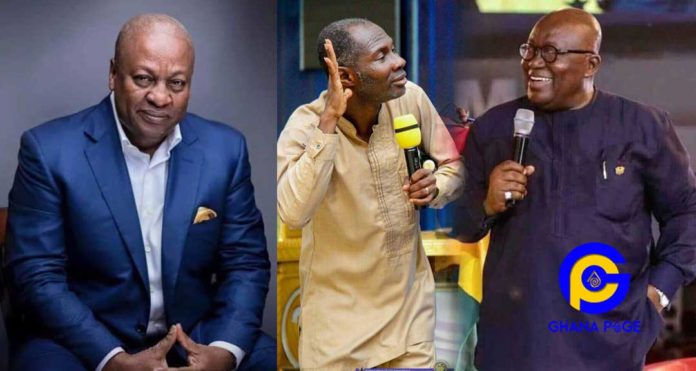 Once again, the founder and leader of Glorious Wave Church International, Prophet Emmanuel Badu Kobi has given his verdict on the presidential election which will be held next year, 7th December 2019.

SEE ALSO: Owusu Bempah has no right to call himself the Nation’s Prophet – Badu Kobi

According to Badu Kobi in an interview with Nana Kwame Afrifra on Accra based Happy FM, Badu Kobi revealed that in the spiritual world, God has revealed to him that the opposition NDC led by John Dramani Mahama will win the election.

Badu Kobi added that his prophecy does not fail just like all that he has prophesied has never failed but if NDC is not careful, the current president, Nana Addo Dankwah Akufo-Addo of the NPP might steal the election as Muhammadu Buhari did in Nigeria.

Prophet Emmanuel Badu Kobi explained that he prophesied that Muhammadu Buhari will lose the election in Nigeria which was held last month because that is what God showed him and that was what God wanted.

But by Muhammadu Buhari’s human effort and scheming, he stole the election and the same thing might happen in 2020 elections.

Watch The Full Video Below (Scroll to 37:28 Minute for where he made these statements)

In the same interview, Badu Kobi revealed that Nana Addo was never meant to win the election in 2016 and he does not know how Nana Addo won it because it’s not from God.