Becca deceived us only for Cardi B to disrespect us – Bullet 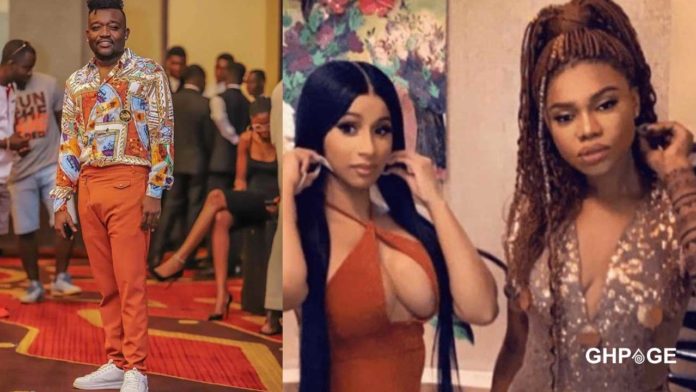 CEO of Ruff Town records Bullet has expressed his anger at songstress Becca for making a fool out of them and other celebrities under the guise of meeting and greeting award-winning rapper Cardi B.

According to Bullet, Becca was the brain behind the whole meeting after she gathered the group of ladies to go and “meet and greet” Cardi B only to be snubbed.

Bullet added that the snubbing was demeaning because it portrayed the celebrities as people who had nothing to do with their time but only wanted to get Cardi B’s attention.

He revealed that Becca had told the celebrities that she had a one-on-one meeting with Cardi B and so they should come.

The RuffTown CEO also said he found it very disturbing that Becca has kept quiet till now while her colleague celebrities are being bashed on social media and other radio and television program.

Bullet further warned Becca saying she should be careful next time and ensure that “it is a done deal” before inviting anyone.

They had gone to the hotel where Cardi B was lodging to interact with her. But the American singer stayed in her room and for over seven hours, never came out to meet them.

Perhaps, because his artiste Wendy Shay was part, Bullet is angry and has warned Becca over this.

Share
Facebook
Twitter
WhatsApp
Previous articleLoad of trash: Nana Aba Anamoah hits back at Abeiku Santana again
Next articleCardi B was paid $1.8 million to perform in Nigeria and Ghana