Just as we thought the Becca-mother-husband-brouhaha was over, the family of Becca’s mother have also reacted to the issue.

In the press release sighted by Ghanapage.com, Madam Julie Yiadom-Oti’s family claim they are not really surprised about the way Becca’s father handled the issue because he was able to impregnate Becca’s mother at age 15 under disturbing circumstances.

The Oti family claimed they have tried to solve the issue amicably as a family after the first interview but Becca’s father is unwilling to resolve the matter because he cannot accept the truth.

“Since the statement from Mr Tobi Oluwale Sanni Daniel made it into the media, we as a family have made an effort to have this matter resolved behind closed doors even after the first media interview.

Julie Oti has been advised by respectable men of God, important persons in Ghana and the family to exercise restraint and keep quiet. Waking up to the false claims against Juliana Oti by Mr Acheampong in his press is, however, truly disappointing.

This also indicates that he is not willing to resolve this matter amicably as he cannot accept the truth”, excerpts of the release read.

Read the full statement below; 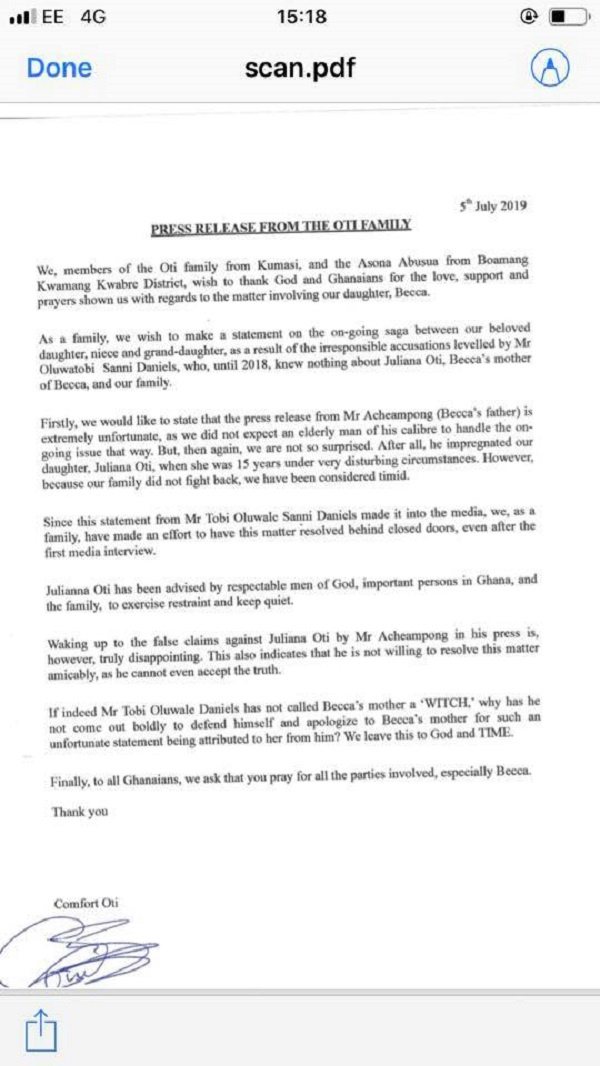 ALSO READ: “I love my mum” -Becca finally speaks on issues about her mother & husband

The Oti family also reiterated Madam Julie’s point that Becca’s husband indeed called her a witch and added that if he claims he is innocent, why hasn’t he come out to defend himself and apologize to Becca’s mother.

This comes after Becca’s father, Mr Acheampong in a press statement claim that all the allegations levelled against Becca’s husband by her mother are false.

He also rendered an apology to Tobi’s family and pleaded with Ghanaians to disregard Madam Julie’s statement and condemned her for addressing family issues on social media.