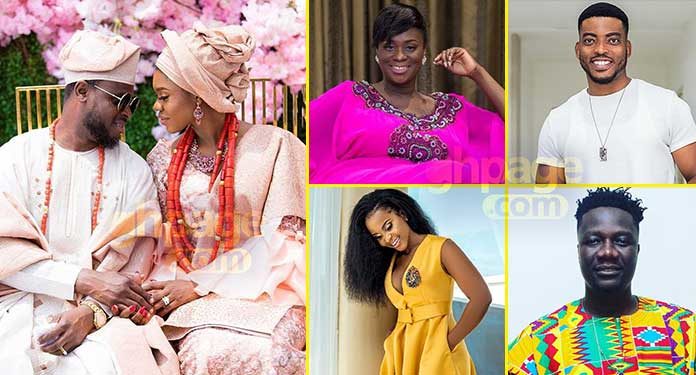 There were some unconfirmed reports that some colleagues of Becca, were conspicuously missing at the much-talked-about Ghana-Nigeria marriage ceremony for a particular reason; an allegation which was earlier made by one Instagram user.

Zylofon music signee Rebecca Acheampong whose showbiz name is Becca last week started a new chapter in her life after she finally tied the knot with her Nigerian boyfriend now husband Daniel Tobi Oluwa Sanni in a plush ceremony.

According to the Instagram user, who’s known for revealing the dark secrets of celebs, Becca was reportedly seen as very arrogant

The post on Instagram read, “Becca bra ha wogye de3n??? Ur colleagues in the Zylofonemedia claims u are too arrogant. …u dnt like their posts or even invites them to ur programmes. ..u feel big among dem wen der is a meeting. …u dnt talk to dem n soo many things. ..so dey are minding their businesses by not wishing u…@beccafrica na true???”

Prior to the allegation made by @thosecalledclelebs, some colleagues of Becca were called out for an issue of infighting.

read this: Photo of Samira Bawumia without makeup pops up on social media

The previous post read, “I just wanna ask @empress_dictabee and @bibibright what @beccafrica has done to them??? i just entered to Zylofonemedia camp na nsem! Nsem!! Competition. ..arrogancy. ..challenge. .eeei boi i heard something kraaa n i was thinking de person was lying so i decided to watch things on Becca bdae…Bibi and Bene were able to wish people on their pages but dey found it soo difficult to wish Becca….lets see if dey wld be attending her alleged wedding with their hypocritical lives mada wai”

The wedding was reportedly held somewhere at Airport in Accra and as usual, friends, colleagues, public figures, and several celebrities such as Sandra Ankobia, Yvonne Nelson, Jackie Appiah, Joselyn Dumas and the likes went to support the bride —who has been one of the leading musicians in Ghana in the last 10 years.

Though many pictures of the event have circulated online, but it seems the only Zylofon music artist who was present was Becca and Zynell Zuh, the actress. Does this mean that there’s an issue as earlier raised by @thosecalledcalebs?