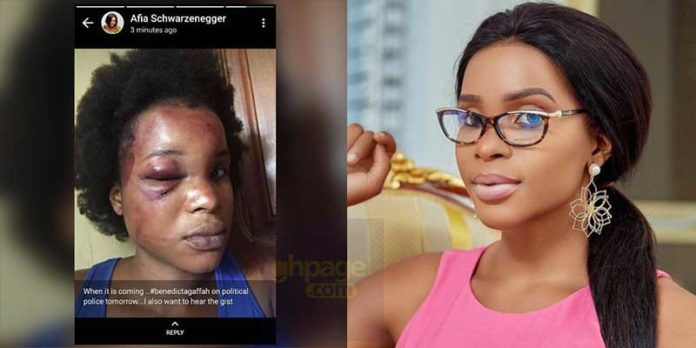 Kumawood actress Benedicta Gafah has finally shared a photo of her damaged face after been assaulted by a man she failed to disclose.

According to actress Benedicta Gafah, she was abused by a man from around 4 years ago abused her after she found out that he was cheating on her and opted to leave. 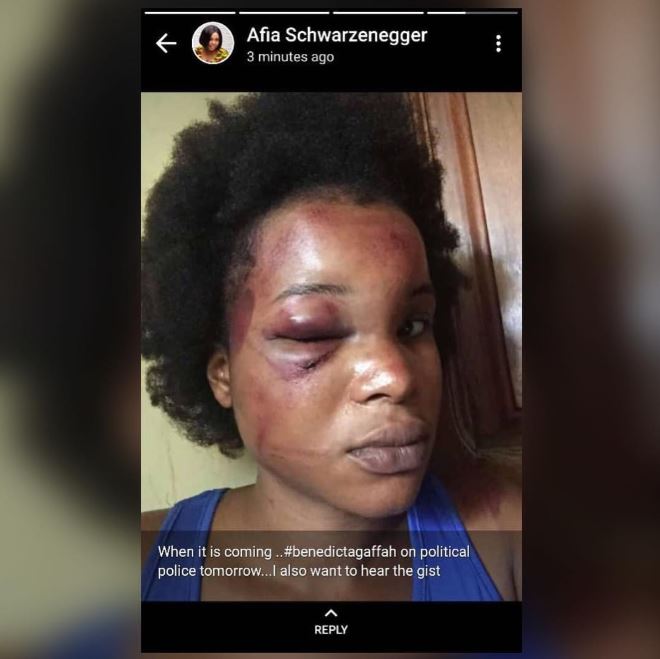 The photo which was earlier shared by controversial Tv personality, Afia Schwarzenegger with the caption ‘when it is coming.. #benedictagaffah on political police tomorrow… I also want to hear the gist’ could be seen as a move to get her on her talk show but that pushed Gafah to address the issue to her followers.

The Xylofon signee then took to her IG page and shared the photo with full details of how she got into such embarrassment as the caption.

“This is the only time I will
Address this situation and I won’t go into detail! My dear @queenafiaschwarzenegger , regardless of everything that has transpired between me and you, I love you as a strong woman that doesn’t conform to society and men! Moreso because I have see you stand up to men that want to belittle and abuse women!
I was abused by a man who was in denial that I left him because I found out that he was married and I refused to continue the relationship we were in, after his wife called me to narrate everything to me. When the man that sent you the picture of my brutally beaten face, my wish was that you ask him What kind of man take joy and pleasure for doing such a heinous act and then send to people? Why does he want me to take the case out of court by reaching out to soo many respectable people? Why is he offering me things to end this matter in court? I will let the laws of the country take care of the rest!! I know there are lots of victims like me being abused emotionally and physically every single day but are scared to speak out just because of what society will say. There’s this negative stigma to people in the entertainment industry especially women. We are perceived to be evil and money hungry but deep down lots of us have hearts of gold. There are thousands of ladies being abused daily. This is a PROBLEM! I’m not ashamed of this picture at all. This picture is a reflection of our world today and the plight women go through every day. I went through this 4 years ago and by the Lords grace, look at me now. I have favor with the Lord and living my best life!!!,” her post read.

Read this: “I prefer given my tithe to the needy than the church” – John Dumelo

It seems these Slay Queens are living their own lives and will do anything as long as they can to survive especially...
Read more
Entertainment

Akua GMB has for the first time has flaunted her beautiful and adorable baby girl on social media after her marriage with...
Read more
Entertainment

Rufftown Records singer Wendy Shay, known in private life as Wendy Addo, is single and ready to settle down with a man...
Read more

Ghanaian lawyer Sandra Ankobiah has over the years been tagged as a slay queen whose expensive lifestyle is funded by big men...
Read more
Lifestyle

Popular Gospel musician and prophetess, Cecilia Marfo has finally reacted to Kennedy Agyapong’s threats and insults on her. According...
Read more