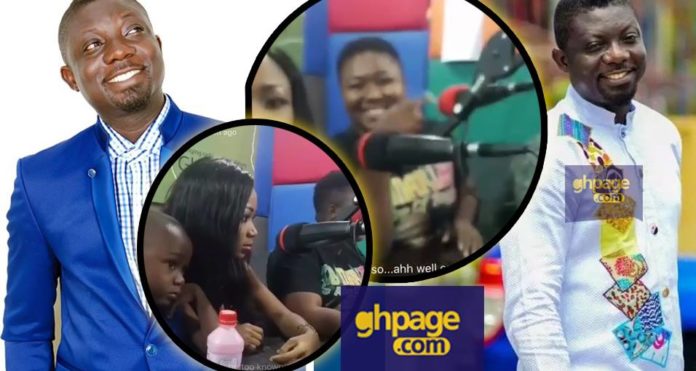 It is not by fluke Ghpage.com is the leading and undoubtedly the hottest entertainment gossip site in Ghana. We go the length to bring you what others dare not and even go behind the scenes to bring you what the celebrities don’t want you to hear.

Well, what we have just learned from a kumawood actress Xandy Kamel is that Kumawood actor Bill Asamoah do not last long in bed. In short, weak, perhaps not to Xandy Kamel’s standard.

READ ALSO: I Am Always Under Spiritual Attack – Sarkodie Reveals

The actress made this revelation during an interview on Peace Fm last Saturday.

One thing to note is that she didn’t say it live on air to the hearing of all listeners —But rather made this interesting revelation to one of the panellists, Ola Michael when they were having a ‘tet a tet a tet’ off the mic when their program, entertainment review was playing commercials.

Watch the video below and please listen attentively;

The ‘wannabe’ actress who made this revelation, Xandy Kamel added that Bill Asamoah dated five other girls while she was dating him.

Xandy has been a nuisance of late. Tomfoolery, carrying herself around as an actress making all the wild unthinkable allegations.

On Kofi TV, she alleged that an actress(We later got to know it’s Benedicta Gafah) wanted to kill her career by sending her to a fetish priest. During that same interview, she coerced Kofi Adomah to fondle her breast.