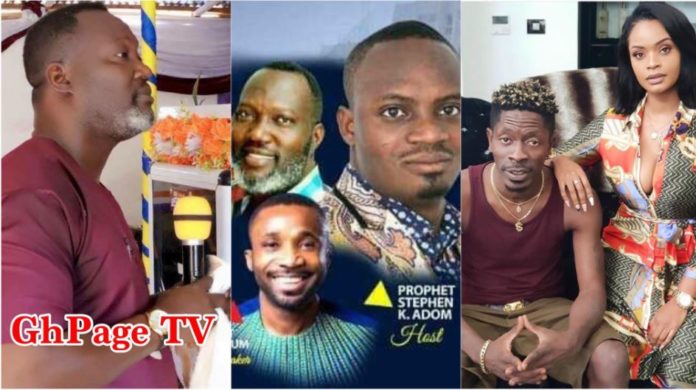 Sensational Kumawood actor, Bishop Bernard Nyarko has added his voice to the numerous tongues lashing out Prophet Adom over his death prophecy on Shatta Wale.

The leader and founder of Zion Miracle Worship Center, Prophet Stephen Adom recently in his church prophesied that the SM boss would have an accident and die on 24th December 2018 unless he changes his behavior.

Well, after his doom prophecy went viral the self-acclaimed dancehall king angrily reacted on the prophecy by telling the man of God to shut and fuck up because he doesn’t know God.

Many people also reacted on the issue as they sent words of warning to the prophet for making such a tragic revelation on the dancehall artist.

Now, the latest person to react on the matter is Kumawood’s Bishop Bernard Nyarko who also has expressed much disappointment in the man of God.

According to the popular actor, he doesn’t understand why some men of God in the country are acting in a nuisance way by growing the desire to prophesy doom on people.

Bishop explains that any true prophet of God will not announce his prophecies on social media but rather will deliver them to the peoples in hand.

He added that these fake prophets always prophecy with the intention of gaining fame and money out of the prophecy outcomes and not for the purpose of saving lives.

Bishop Bernard Nyarko continued to reveal that these fake prophets possess a dark power from a spirit called Leviathan who tries to manifest its powers by making doom prophecies a reality.

He further urged all his fellow celebrities to engage themselves in prayers anytime such prophecies a laid on them as he affirmed that Shatta Wale and Wendy Shay are not going to die as it has already been predicted.

Since the beginning of the year, several men of God have prophecied about the death that would befall some prominent people in the country and as well as some celebrities including Shatta Wale and recently about Ruff Town signee Wendy Shay.