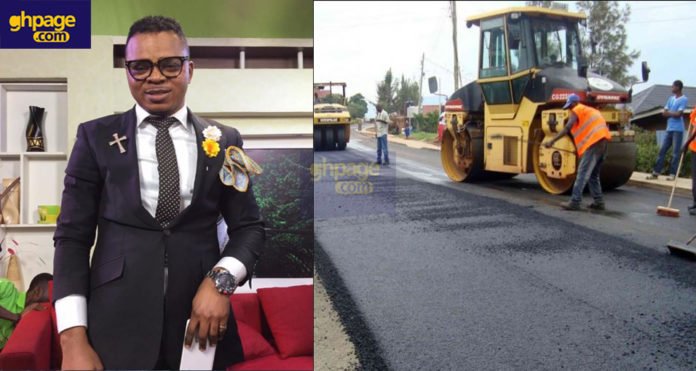 The founder and leader of the International Godsway Church, Bishop Daniel Obinim is constructing a major road in Kumasi.

According to reports gathered by Ghpage.com, the road is from Kenyasi to Bosore, where Obinim’s Kumasi branch is located.

In a video sighted on Tindstar GH TV, Obinim explained why he offered such a choice to construct the road, which he said was in terrible shape.

He added that although he often used the road once or twice in a week, God touched his heart to fix it.

Read Also: My accident was God’s plan to fulfill his purpose in my life – Yaw Siki

“In fact, the road from Kenyasi to Bosore is not good at all. It’s a very, very bad road. It’s really a terrible road.

“In Ghana, one of our major problems is bad roads, but it’s not everything we can leave for the government to do. So, God touched my heart to construct the road,” he explained using the Twi language.

Angel Obinim stated that the work on the project is firmly advancing, adding that he had finished the first phase, which involved leveling the road and constructing gutters along it.

He further continued revealing that the second phase, which involved tarring the road, was has also started.

Speaking on the huge amount involved in the project, the bishop said the gutters along the roadsides and two bridges on the road had been very costly to build.

He said after completing the gutter, he bought more than 1000 trips of sand for over GH? 1 million.

Angel Obinim maintained that although the cost of the project continued to increase, no one living in the area had offered to assist him.

“There are many wealthy men living in Bosore. Some are MPs; some are assemblymen; some are chiefs; some are even queen mothers. Yet, none of them has come to me to say, ‘Bishop’ or ‘Angel, take one cedi to aid the construction of the road,” Obinim explained.

Read Also: Model weeps on social media after her panties went missing at a hotel

He, therefore, urged his church members and the public to donate towards the construction of the road.

The controversial man of God stated in the video that he had chosen not to use spiritual funds for the project because he wanted the public to share in its blessings.

“Given the huge cost involved in the project, I going to need your support. I could go the spiritual realm to take the money and transfer it into physical for the construction of the road, but if I do that, you won’t get blessings,” he said, urging people to donate at least 100 cedis to the project.

Read Also: Audio: Prophet Nigel accused of acquiring his prophetic powers from a Juju he took from the Gambia

Bishop Daniel Obinim was recently in the news as he made a confession that he has the ability to go into the spiritual realm to steal money and then convert it into physical cash.