Some Black Stars players snuck women into the camp and were inimate with them few hours before the match. They also almost beat up Dede Ayew for complaining about their behavior 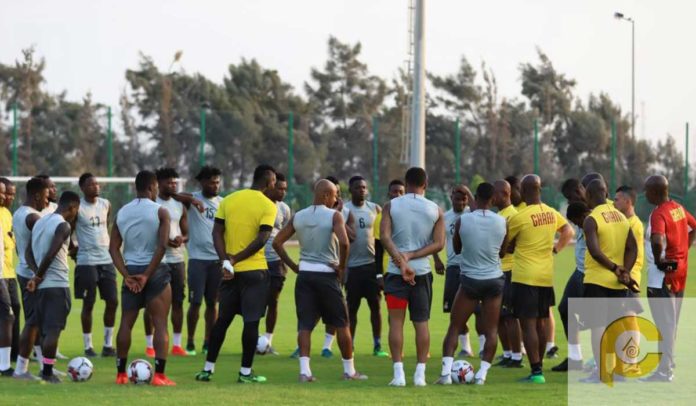 Some journalists who travelled with the Black Stars to Egypt have began reporting on indiscipline, unprofessional and general misconduct of the players in the camp.

The biggest of these allegations is that some of the players allegedly engaged s*xual activities a couple of hours before matches.

Reporting on this issue, George Addo Jnr, a Ghanaian journalist, alleges that some of the players snuck in women into the Black Stars camp and chopped them before the match. Very unprofessional.

He further added that when the captain of the team, Andre Ayew confronted some of the players about it poor behaviour of theirs, they nearly beat him up.

It would be recalled that in 2014 there were similar cases of indiscipline and it appears that It’s still the same behaviour being exhibited by the team.

Ghanaians are accusing the coach James Kwesi Appiah of improper management of the team as he was the coach in both tournaments.

“How i wish it is untrue…that

*Some Black Stars players engaged themselves in s*xual bouts before every match during their short stay in Egypt.

*(lodged their girlfriends in the same hotel they camped in),

*Key member of the team…nearly fought the captain when he complained of the above..

*Captain was unhappy about the Coach subbing him…when he wanted to die with the team.

*General captain not comfortable with too many happenings…and the factions that existed before in the team did not fade..

Wondered why ..Captain in the abscence of his deputy ,hands over the band to Boye…in the presence of the general captain ?

*Sports ministry splashed in excess of 10million dollars to induce /and set the operational grounds to win the trophy….

*Sad!! Superstition was King- and that technical bench was equally split..over a number of issues….