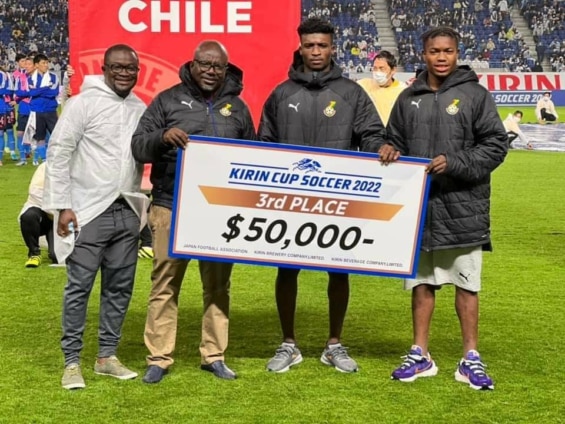 For finishing third in the just concluded 2022 Kirin Cup in Japan, the Black Stars were awarded a $50,000 cash prize.

Despite a dismal performance against Japan on Friday, in which they lost 4-1, the Black Stars defeated Chile to finish third in the four-nation tournament.

After a 0-0 draw in regulation time, Abdul Manaf Nurudeen was the hero of the day, saving two penalties in the shoot-outs to give Ghana the victory.

After Jordan Ayew scored for Ghana, Manaf Nurudeen stopped back-to-back Chilean kicks to square the score, with the South American team grabbing the lead, while Gary Medel’s shot went wide to give Otto Addo’s side the win.

The competition acted as a warm-up for the Black Stars in preparation for the 2022 FIFA World Cup, which would be held in Qatar.