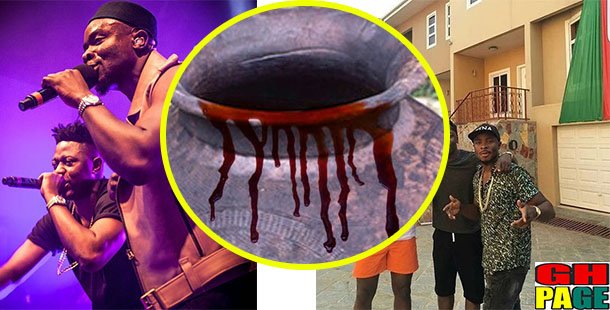 The management of the award-winning music producer born Joseph Addison, popularly known as KillBeatz have come out with their version of what really happened that led to the sacking of their artiste out of Fuse ODG’s house.

Ghpage.com  yesterday published a report we gathered that angry Fuse ODG had thrown Killbeatz out of his house after breaking several house rules and discovering a strange blood pot.

Aside from breaking the house rules, one of the reports indicated that Fuse discovered a strange pot filled with blood in one of the rooms in his house.

The management had earlier cleared why Fuse ODG is behaving this way which they attributed to the hatred he has for rising star King Promise.

He further went ahead to talk about the blood found at Fuse ODGs house, which to them is as a result of Killbeatz birthday celebration a few days ago, with some close friends and nothing more.

“We had a birthday party for Killbeatz and as part of the celebration, R2Bees and some other friends brought a full cow for the barbecue. Muslims, after killing a cow, there are certain prayers one has to recite for taking away its life and we respect that tradition so we did that.”The manager is quoted to have said.

“We slaughtered the cow and poured out the blood in a hole which is normal to everyone so why will Fuse ODG book a flight all the way from London to Ghana and accuse his producer of doing rituals at a house they both own. Fuse ODG preaches “This Is New Africa” but it seems he knows nothing about Africa and Ghana if he tells me he doesn’t know this act is common in our Motherland.”Killbeatz manager added.

The management is said to have gone on to say that the house belongs to Fuse and Killbeatz because both put their resources together to build it.

“In the first place, Killbeatz doesn’t even owe Fuse ODG any explanation because that house is for both of them. They both worked hard to buy it together so if he is saying it’s his house then I can say Fuse ODG get a problem, which we will handle later because as it stands now, they both own that house.” The manager added.