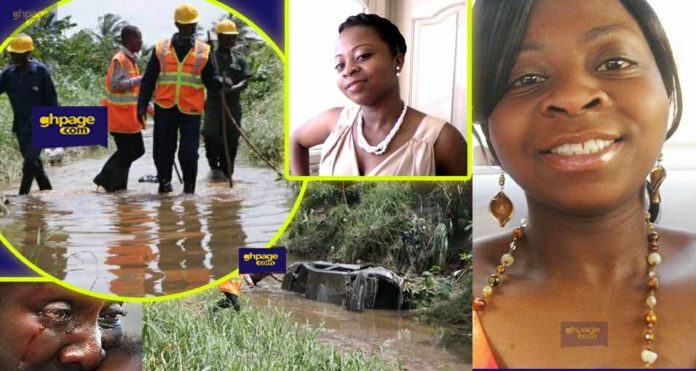 GHPAGE.com reported the news of the missing Korle-Bu doctor,  Aya Hayfron who was washed away in her Salon car during Monday’s heavy rain in Accra.

After her husband’s narration of how the incident happened on Accra-based Adom FM on Tuesday, the Teshie Police Commander, Superintendent Peter Yembilla had said together with the Ghana National Fire Service is still searching for the missing doctor and will not stop until they find her.

Indeed, they have found the body of the 32-year-old doctor. She was found in the Kpeshi Lagoon in Accra.

Archibald Cobbinah, the Greater Accra Regional Coordinator for the National Disaster Management Organization (NADMO) confirmed it and added that the local fisherman found Aya Hayfron’s body, which has since been sent to a morgue.

The deceased, Dr. Aya Hayfron was returning home from church but was trapped at a bridge on Teshie Bush Road and later got carried away by heavy flood waters.

Her husband said rescuers were unable to save the 32-year-old doctor but managed to save the two passengers who had been offered a lift by the deceased.

Her distraught husband, Bernard Kofi Agyei Oppong continued that the waters were up above his waist level but he determined to save her —he swam to her car, where a group of people was attempting to rescue her to no avail.

Moments later,  her vehicle slowly slid into a river with her trapped inside. Helplessly, he watched his wife disappear and that was the last time he saw her — until now that her body has been found.

READ ALSO: Full audio: Husband of Korle-Bu doctor who was carried away narrates how the sad incident happened.