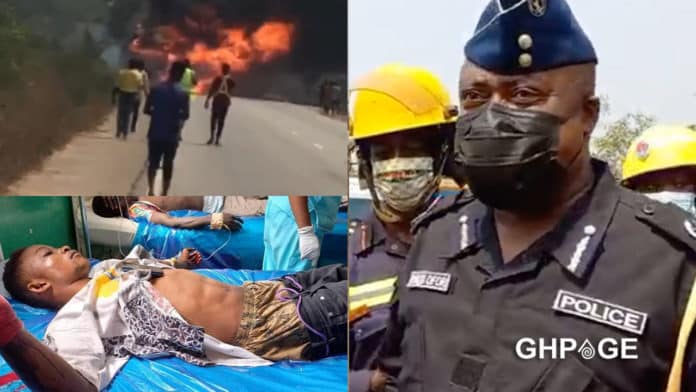 The Ghana Police Service has responded to queries about the whereabouts of the driver of the truck that exploded near Bogoso in the Western Region on Thursday.

According to the Director-General of the Police Public Affairs Department, ACP Kwesi Ofori the driver is alive.

In addition to this confirmation, he said the motorcycle rider whose collision with the truck sparked the fire that triggered the blast is also alive, just as the police escort assigned to the truck.

Speaking on Citi FM, ACP Kwesi Ofori said the Tarkwa Divisional Police duly signed and approved a police escort for the truck which was transporting explosives to Chirano Gold Mines.

The police officer has since been interrogated and provided relevant information to the police on what happened.

“The police administration will like to place on record that the vehicle in question was under escort and documents were prepared and given to the escort team to escort the product to its destination. It was properly signed by the Tarkwa Divisional Police and there is no foul play at all…The police officer has been interrogated and has given his opinion on the matter,” ACP Kwesi Ofori explained.

Following the Thursday afternoon incident, many different accounts have been given including claims that the driver and the motorcyclist had died.

Others also claimed that there was no security escort for the transport of the explosives.

But according to ACP Kwesi Ofori, the police escort, motorcyclist and truck driver all survived the deadly incident.

He said the driver, together with the police escort helped to reduce the number of casualties by warning nearby residents including school pupils in a school to move away due to the imminent explosion.

“When the incident took place, the police officer quickly alerted those around the scene that there is a likelihood that there would be an explosion. When the accident occurred, it took about 15 to 20 minutes before the first explosion. The police quickly with the driver tried as much as possible to tell the onlookers to leave the place. Some heeded others didn’t. The first occurred and the second explosion ravaged the town and the village where a lot of destruction took place,” ACP Kwesi Ofori added.

“The driver, the police officer and the motor rider are all alive because they heeded to the advice,” he noted.

Meanwhile, at least 13 people have been confirmed dead with 59 others badly injured.

Over 170 families were directly affected by the incident.

Meanwhile, the Vice President, on behalf of the government visited the Bogoso Catholic Parish Relief Centre where over 300 of the displaced persons are being catered for and donated mattresses, bags of rice as well as GH¢200,000 for the upkeep of survivors.