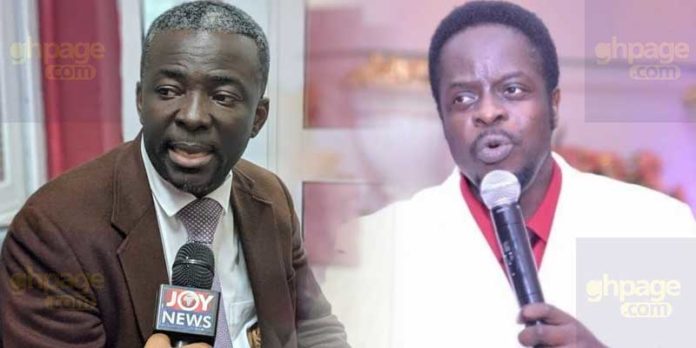 One-time highlife & hiplife musician Papa Shee whose music received massive airplay over a decade ago and now an evangelist has taken a swipe at Ofori Amponsah citing that some people find it hard to believe in them as born-again Christians because of Ofori Amponsah’s attitude.

According to Papa Shee, who is known for hit songs like “Koyon Sor”, his faith in God has been questioned by those he tries to convert all because they think he will also return to secular music just like Ofori Amponsah did.

“Once you accept Jesus, Jesus says for my namesake they will persecute you so you know the persecutors are there. I mean check my Facebook sometimes somebody will say hmm, we don’t trust because one of them has come and run away but I was called before Ofori was called, even Lord Kenya, I prayed for all of them,” he told JoyNews’ MzGee

Read also: Remember Highlife Artiste, Papa Shee? This Is How He Looks Now

It could be recalled that somewhere 2012, Highlife musician Ofori Amponsah made headlines when he left secular music to establish his own church named, “Family of Faith & Love.”

However, after doing God’s work for five years he made a U-turn to secular music which got him a lot of backlashes from the public.

One musician who also laughed off Ofori’s calling is Kofi B. According to Kofi B said he laughed when he heard Ofori Amponsah had become a pastor, adding that he predicted the church his colleague established will not last.

According to the ‘ Bantama Kwasi Boakye’ hitmaker, the only reason Ofori Amponsah became a Pastor was because of the ‘offering’ he would get from his church members.

Read this: “God Did Not Call Me To Be A Pastor; Broken Heart Led Me Into It” -Ofori Amponsah Finally Admits

Kofi B added that there was no way Ofori Amponsah was ordained by God and established his church out of frustration.

According to evangelist Papa Shee, this attitude put forth by Ofori Amponsah is making born-again secular artists who’re willing to win souls for God suffer because they tend to believe they will backslide like him.

“I prayed for them but mine is quiet, laidback and I’m doing my evangelism for Jesus. I didn’t open a church because I was hearing from the Lord before I move because it is not by your strength,” he said.

Asked what he has done about Ofori Amponsah’s situation, Papa Shee told MzGee, he has been praying for the musician.

“Actually, I have not had the chance to speak to him personally but what I did is, I prayed for him and I’m going to continue praying for him,” Papa Shee said.

Read more: Ofori Amponsah became a Pastor because of the ‘offering’ – Kofi B