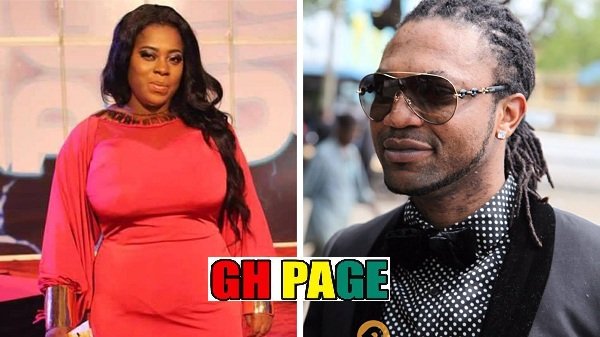 By now most people know that Amanda Jissih who recently resigned from Hitz FM use to date Bright of Buk Bak fame. Initially, the two did everything possible to hide their affair but for whatever reason, they had to make it public.

Amanda Jissh once stated on Peace Fm Entertainment review that Bright is the love of her life, She said:

“The only person I have ever dated in this entertainment industry and the only man I really ever love is Bright Sparkles of Buk Bak fame. I loved Bright and I will say it for the whole world to know.”

A month or two later, Bright publicly proclaimed his love for Amanda Jissih on Joy FM’s ‘Night With The Stars’. Performing with his late colleague Ronnie, Bright paused in the middle of the performance and he said:

“Ladies and gentlemen, I would like to acknowledge the presence of a very important person. Please show some love to my girl Amanda Jissih seated right there please show some love”, Bright said whiles Amanda was seated smiling and blushing.

Bright went on to say “You know I Love you, everybody knows we love you” and he later got off the stage went to Amanda and sang for her.

Amanda who didn’t see this coming, seemed very happy and somehow surprised because that was the first time Bright has said those words to her publicly.

SEE ALSO: Being plump with a big stomach doesn’t make you matured- Amanda Jissih should grow up!!

The two lovebirds actually lived together in an apartment in East Legon when Bright returned from the States.

Well, few months after making their hidden love public, it was over just like that and people have been wondering what really happened to such a young and promising love.

Well, Ghpage.com dug and now we have found it. Aside from the fact that Amanda Jissih was disrespectful, rude, incredibly lazy, it’s believed Bright only used, exploited and dumped her.

It appears when Bright returned from the United States to rebuild the Buk Bak group we use to know, they needed an influential person with money in the entertainment industry to back them. What better way than to date the loudest among them who has a little cash to spend.

SEE ALSO: Being plump with a big stomach doesn’t make you matured- Amanda Jissih should grow UP!!

A close friend of Amanda Jissih confirmed to News-One that indeed, Bright just used her to regain grounds in the music industry. She said:

“Oh, Bright only used her. She was spending her life savings on him, managing his career and just pushing his group to make sure they are accepted again. But she now has a broken heart. Bright left this country without even telling her. Some of these things are all over her phone and it is no secret among her friends.”

Ghpage.com discovered that Bright left the country back to his base in the United States without even telling her he was traveling and that ended their rosy love affair.

Upon further investigations, we discovered that the rude, lazy, bossy and disrespectful Amanda Jissih you know today is exactly how she was back in the day when she claimed she was deeply in love with Bright. Wouldn’t you have run if you were Bright???

SEE ALSO:Being plump with a big stomach doesn’t make you matured- Amanda Jissih should grow up!!

And oh, to reiterate Bright used and dumped her sorry a$s to marry someone else in the states ..And below is a picture of their engagement;