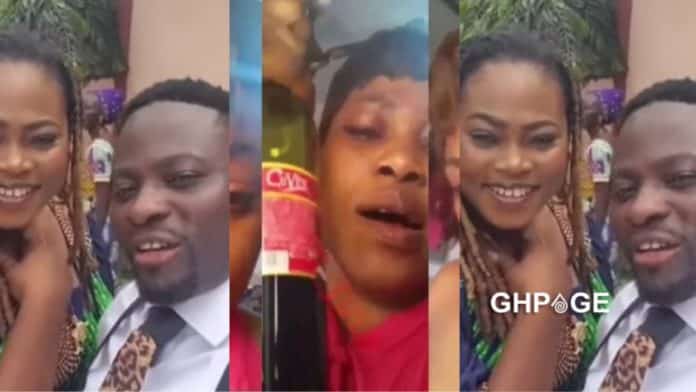 Gospel star, Brother Sammy has received public backlash after a video of him making a mockery of Joyce Blessing with a reference to her viral drunk video.

About three weeks ago, Joyce Blessing became the talk of town after Nana Agradaa dropped a video of her drunk and crying to her alleged lover to take her back.

After the ill-famed video landed on the internet, a lot of Ghanaians most especially the Christians amongst us trolled her for disgracing the gospel fraternity of the showbiz industry.

The matter worsened after her husband, Dave Joy, did a video to disassociate himself from the whole brouhaha following Joy Blessing’s claims that he was the one she did the video for and not any side lover.

The matter has vanished from the internet but corner Brother Sammy has refreshed the minds of Ghanaians once again citing a new hilarious video from his camp.

In the video, Joyce Blessing and Brother Sammy appeared to have met at a program therefore the need to exchange pleasantries.

Brother Sammy insisted on a video rather and while they were making the footage, he mimicked exactly what Joyce Blessing was doing in her drunk video accompanied by the words she was saying.

Joyce Blessing who felt uneasy immediately told Brother Sammy to stop but the harm had already been done.

Brother Sammy should have considered a lot of things before trolling Joyce Blessing. The matter had naturally died but he has resurrected it once again.

He has indirectly delivered Joyce Blessing to the merciless hands of trolls which is not fair.