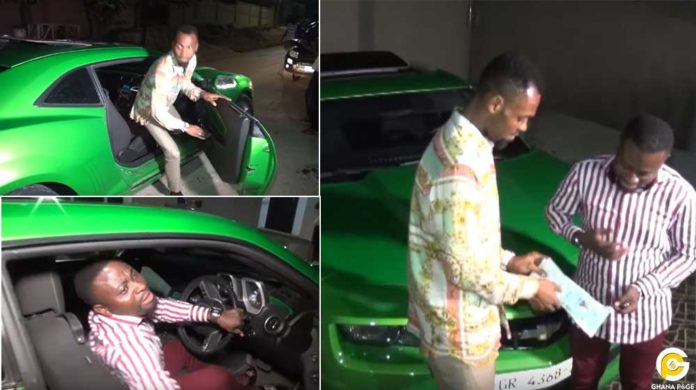 Gospel musician Brother Sammy has joined the list of celebrities who have benefitted from the kind gestures of Rev. Obofour after receiving a 2018 registered Camaro car worth 3.2 billion from the preacher.

The founder and leader of Anointed Palace chapel last Saturday as part of the celebration to mark his mother known as Maame Afia Pokuaa 60th birthday decided to gift some celebrities cars.

In a video shared by Ghpage.com Rev. Obofour is heard asking Brother Sammy why he goes around people about the good thing he(Obofour) has been doing.

He went on to tell Bro. Sammy that he was giving him a car but it was unfortunate the car was in Kumasi and he(Bro. Sammy) should go for it in his house in Kumasi.

Well, the preacher has finally presented the car to the Gospel musician after he invited him over to his house for a small feast.

This is not the first time Reverend Obofour has done something as eyebrow-raising as this one in recent times.

About six months ago, he dashed over 15 cars to people ranging from pastors, singers, and ordinary members in his church.

Prominent among the recipients were Prophet Emmanuel Badu Kobi of the Glorious Wave Ministries and Auntie Bee of Efiewura fame. The two got a Jaguar and a Hyundai Elantra respectively.