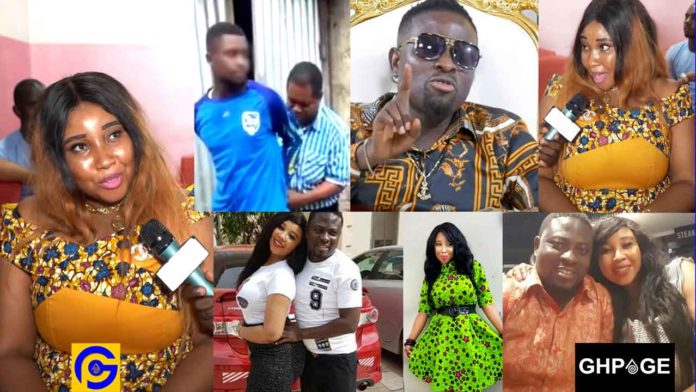 The wife of popular Ghanaian gospel musician Brother Sammy has finally spoken after her marital issues became a topic for discussion a few days ago.

In an interview with Kofi TV, the lady identified as Mrs Perpetual Opoku revealed how she was brainwashed by her husband’s friend to end the marriage.

According to Perpetual, her husband’s friend who was identified as Solomon lied about her husband’s infidelity and advised her to leave him.

Brother Sammy’s wife disclosed that all the rumours about her marriage hitting the rocks are false and that she has no intentions of leaving her marriage.

Mrs Perpetual Opoku also known as Obaa Yaa indicated that all these lies nearly wrecked her marriage and has learned to trust her husband more.

However, Brother Sammy who was also present during the interview, revealed that they are both on good terms.

Brother Sammy also rendered an apology to his wife over his outburst on live tv, explaining that he spoke out of emotions.

ALSO READ: Brother Sammy sadly reveals why he would not have sex with his wife again

Few days ago, Brother Sammy during his appearance on United Showbiz revealed that he will no longer have sex with his wife.

The musician explained that his wife accused him of being an occultist who wants to use her for rituals.

Brother Sammy added that his wife was lied to by one of his boys that he (Brother Sammy) had sex with a different woman while she was receiving treatment at the hospital.

According to Brother Sammy, his wife believed all the lies she was told about him and has since decided to not sleep with his wife anymore.