Bulldog confirms Samini and Stonebwoy’s snub at the ‘Reign’ concert 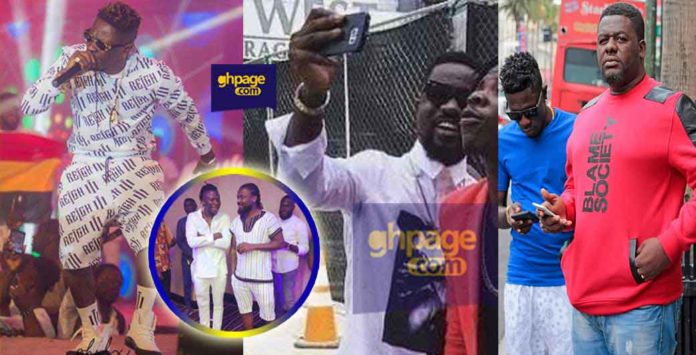 GhPage.com has sighted a video interview from Nana Asiamah Hanson known in showbiz circles as Bulldog which he confirmed that indeed, Samini and Stonebwoy were not allowed to perform at Shatta Wale’s ‘Reign’ concert.

Shatta Wale denying his archrivals Samini and Stonebwoy to perform at the just ended ‘Reign’ concert was brought to light in a tweet by Samini congratulating the ‘amount’ hitmaker for having a successful album launch.

According to Samini, him —together with Stonebwoy— showed up at the event to reciprocate the same ‘surprised gesture’ Shatta had shown them during the ‘Saminifest’ and ‘Ashaiman to the world concert’.

He continued that they waited in their car for over an hour only to be told Shatta refused their gesture.

Shatta Wale has also reacted which he indicated that Samini’s claim is a news to him but quickly apologised if that was the case.

However, Bulldog in an interview with Andy Dosty on Hitz FM confirmed that they denied the two artistes to perform because of their own interest.

READ ALSO: First copy of Reign Album was sold to a couple for GHC150,000

He reasoned that some Shatta movement fans were outraged and a mere sight of them behind the stage would have brought an abrupt end to the concert.

“Some of us needed to protect our artistes and we realized that when Samini and Stonebwoy come on stage, it would have been a different thing, so I took that call that it can’t happen.” Bulldog stated.

On whether Shatta Wale knew Samini and Stonebwoy were around waiting to perform, Bulldog said, there were a lot of people around and a lot of things happening so can’t readily confirm if Shatta had an idea they were around.

Moreover, Stonebwoy has also revealed in a tweet that they were indeed there to support and it was a clear opportunity, any serious artist will never let it pass but Shatta Wale did.

“Surprise Support is Way Better Than. A Fake Twit. But For INSECURITY Problems !! You Refused To Take advantage of The Opportunity. Would You Have Asked The Crowed if you Weren’t AWARE. Why Lie? Feel Free Come On We Knew You Will Refuse Us Anyway. #ATTWC27Oct Come See!”

Shatta Wale, pulled off one of the biggest concerts in the history of Ghana on Saturday, at the Fantasy Dome at the Trade Fair in Accra.

The concert, with an estimated 20,000 people in attendance, was for the launch of his latest album ‘Reign’.