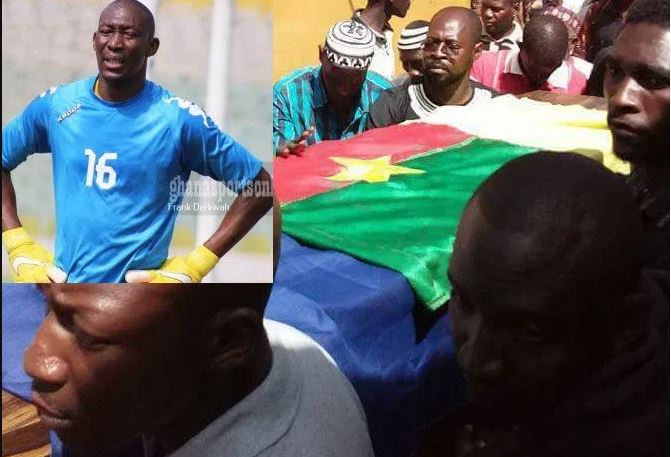 The former Asante Kotoko SC and Hearts of Oak goalkeeper, Soulama Abdoulaye who also played for ASFA Yennega of Burkina Faso passed away in Bobo Dioulasso on last Friday at the age of 37 after a long illness.

As a Muslim, he was on Sunday, buried at his hometown Banfora in Burkina Faso.

The burial service was well attended by the officials of the Burkina Football Authority and his colleague players.

And below are photos from his burial service

Abdoulaye Soulama was born on November 29, 1979.He began his football at the Comoé Sports Union (USCO) in Banfora.He has also played for clubs such as the Sports Association of Bobo-Dioulasso Officials (ASFB) and ASFA Yennenga.

His last club was Accra’s Heart Of Oak, which he joined after leaving Asante Kotoko of Kumasi (Ghana) where he was also the captain.

He had a tour in Algeria (CA Batan) before spending two years at the Turkish club Denezilispor where he played 25 games in two years.

READ ALSO:10 Celebrities You Never Knew Are Lawyers (With Pictures)

The third choice goalkeeper at the 1998 African Cup of Nations (CAN) in Burkina Faso, Abdoulaye Soulama won the silver medal at the 2013 CAN in South Africa under coach Paul Put.

Abdoulaye Soulama is part of the legend of the great goalkeepers that Burkina Faso has known.