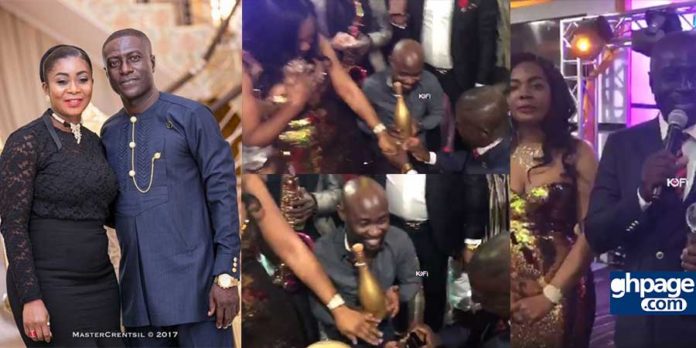 He proposed to the new love when he went to receive his award.

Acknowledging the organizers and the people for their support, he took the chance to speak to the diasporas about his initiative to support the Ghana ambulance service—which he appealed to them for more support.

He also took time to speak about his love life and what he has gone through over the years. He was paused midway through his delivery which a songster took his mic to allow the proposal ceremony to commence.

Captain brought out his ring, then gently went on his knees, popped the all-important question, “will you marry me?” and a moment after, put the ring on Akosua’s finger—amid the cheers and pageantry.

The stunned lady who couldn’t hide the excitement broke into tears of joy.

GHPAGE.com in a series of reports revealed that a Belgium based Ghanaian called Murphy accused Captain Smart of snatching his wife of 18 years —with whom he has two children —while they were married.

He disclosed that he lost his job and expected his wife to stay by him and support him in this crisis but his wife informed him that she had to travel to Ghana and could not stay by him.

Unknowingly, his wife was on her way to Ghana to get married to Captain Smart while they were still legally married.

Murphy, therefore, begged Captain Smart to leave his wife alone as he still loves her and want her back but it all proved futile.

Captain went ahead to marry Afia Pokuaa. They had moments of lovey-dovey and the radio presenter now claims, it was time to let that love go and find what suits him.

Kennedy Agyapong in a recent outburst also spoke about Murphy’s death in relation to Captain Smart’s relationship with his wife —which he added the radio presenter will live to regret after causing a man’s death with a broken heart.