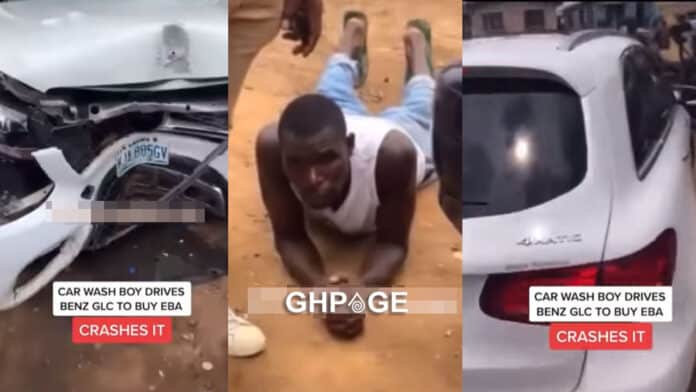 A carwash attendant in Nigeria has landed in hot waters after crashing a Mercedes Benz GLC a client left in his care for a clean-up.

The young man, according to reports, jumped behind the wheels of the luxury vehicle to buy a local delicacy known as Eba from an eatery, only for him to smash the car into an obstacle.

A video circulating on social media shows the vehicle worth thousands of dollars badly mangled with an eminently high repair cost.

In the corresponding video sighted by GHPage, the young man is seen lying prostrate on the ground, seemingly appealing to the owner of the car to pardon him for his recklessness.

The hilarious yet critical incident has elicited mixed reactions from social media users, many of whom have slammed the young carwash attendant for his recklessness.

Check out some of the comments below

quadriojimoh: Allow him to eat the Eba first

oriyomii__: He suppose buy new car not even repairing

behindmyeyes17: He will go to jail. 60 million years.