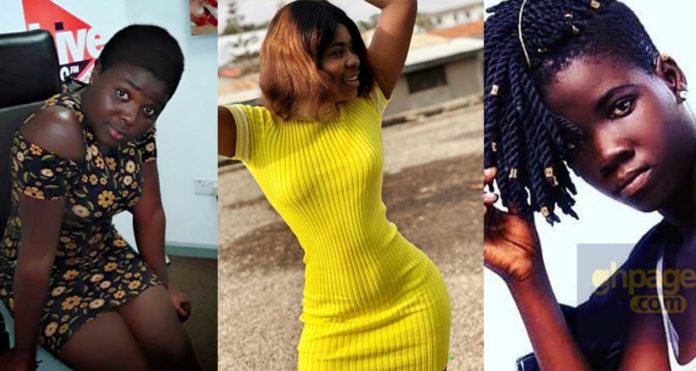 For days now both Dhat Gyal and Chikel, the rising female Dancehall artists have been beefing Kumawood actress and songstress, Maame Yaa Jackson and many people are at lost as to how it all started.

Well, Ghpage.com has all the answers. A Facebook page with the name Yaa Jackson1 has for weeks now been attacking Dhat Gyal and Chikel. From calling them girls with no talent, overhyped musician to ugly and attention seeking rising musicians, all these words have been used on Dhat Gyal and Chikel on the said page.

SEE ALSO: Rahim Banda is a small boy for me to date – Yaa Jackson

Some of the posts on Yaa Jackson1 reads:

All I can see is Lazy girls calling themselves musicians. Let me tell y’all..I’m the best and youngest musician here in Ghana. Stop giving Chikel and Dhat Gyal unnecessary hype. They’re not talented. They just trying to ride on Ebony’s death to become famous

I ain’t hating on anyone but the truth shall be told. If y’all are not brave to let it out, I’ll do that for u. Dhat Gyal And Chikel ain’t musicians. They’re just opportunists trying to ride on Ebony’s death to become famous.

The attacks from the page purporting to Yaa Jackson’s started after Chikel referred to Maame Yaa Jackson as a talentless musician.

On Monday, Dhat Gyal apparently had enough of the mockery and unleashed her own anger on Maame Yaa Jackson.

In a post on her own page, Dhat Gyal Africa, the rising Dancehall artist called Maame Yaa Jackson foolish and adviced her to work hard and stop the “madness”.

SEE ALSO: Ebony’s Father Makes Another 4 Allegations Against Bullet Over His Daughter’s Death

According to Dhat Gyal, the difference between her and Yaa Jackson that is making Yaa hate on her is that she is blessed and Yaa Jackson just wants to be famous by fooling.

This is pure foolishness YaaJackson1 work hard and get the fame and stop this madness …the difference between you and me is. Am blessed and u wanna get fame by fooling.

Interestingly, it appears Dhat Gyal has been “fooled”. Ghpage.com reached out to Yaa Jackson for her comments on the social media post which is generating all the craze and it turned out the page is a fake page.

Yaa Jackson’s page is named Yaa Jackson4 and in 2017, Yaa Jackson made a video and posted on her social media handles stating clearly that she does not own the page and she is not affiliated to it in any way.

In fact, she begged her fans to report the page, Yaa Jackson1 to Facebook for it to be taken down. It is that page created by someone unrelated to Yaa Jackson which is causing all the trouble between the 3 rising musicians in Ghana.