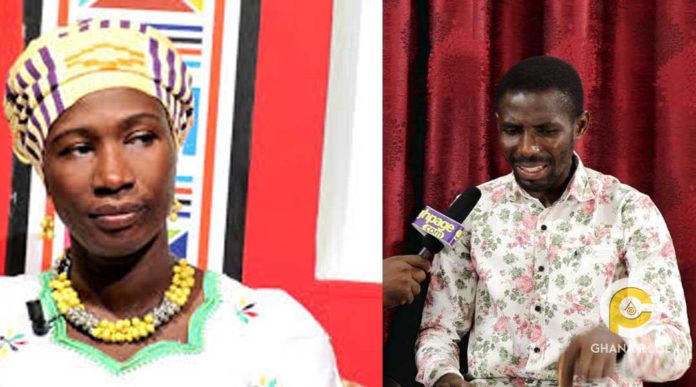 Gospel musician Cecilia Marfo is likely to write down the year 2019 as a very bad year for her.

Since the beginning of the year, there has been an allegation against her by some of her former associates who have accused her of using marine spirit at her prayer camp and also hypnotizing them to do things against their will.

Well, a former cook of the Gospel musician has also come out to accuse her of several things including as him to strip naked in front of her so she could pray for him.

According to the former cook identified as Godwin in an interview with Ghpage TV disclosed that he stayed with Cecilia Marfo at her prayer camp for almost three years and during his stay the things that he was asked to do and been done by the musician was shocking to him but he had no voice to speak against it.

He went to state that there was a day that he had a revelation and went to the musician to tell her about the revelation after telling her about it, all she said was to ask him to strip naked and put his manhood in her palms so she could pray on it for him.

Godwin also in the interview confirmed that indeed Cecilia Marfo was sleeping with her driver behind her husband because she claimed the husband is possessed by an evil spirit and she can’t stand him.

He ended by saying he was not making those statement up to tarnish her image but he came out because he wants the followers of the singer to know what she is really into since she looks humble on the outside but she is very bad when one gets in contact with her.