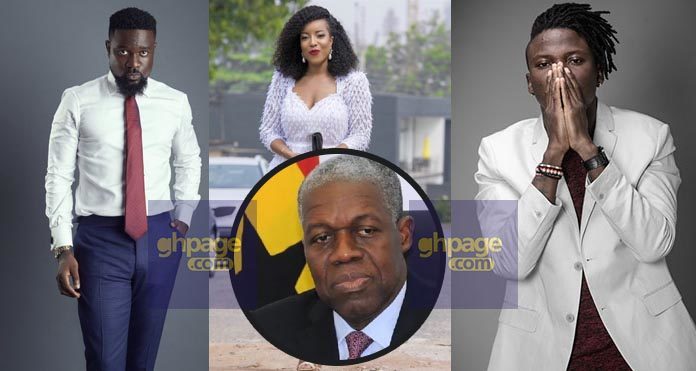 One of the saddest news in Ghana right now is the passing of the former vice president of Ghana Amissah Arthur.

According to the reports, he died this morning at a gym where he had gone to train. Mr Amissah Arthur was the vice president of Ghana between 2012 and 2016.

From unconfirmed reports, Mr Paa Kwesi Amissah Arthur died from a cardiac arrest but Ghpage.com is waiting on the authorities and the family for the confirmed cause of death of the former vice president.

Celebrities have commiserated with the family of former vice president, His Excellency Paa Kwesi Amissah-Arthur on social media following his death.

The list included rapper Sarkodie, actress Joycelyn Dumas, KSM and First Lady Rebecca Akufo-Addo among others who thought his demise was an unfortunate one.

read also: ALLEGEDLY, CARDIAC ARREST IS THE CAUSE OF DEATH OF FORMER VICE PRESIDENT AMISSAH ARTHUR

Below are some of the reactions…

My heart goes out to the family, friends and close associates of the late former vice President of Ghana, Mr. Kwesi Amissah Arthur.

The news of the sudden death of the former Vice President of the Republic, His Excellency Paa Kwesi Amissah Arthur has shocked and saddened me. His sudden demise is a big blow to our country.

read this too: I will expose those who killed Amissah Arthur after his burial – Owusu Bempah

The UNCERTAINTY of LIFE has been magnified again. His Exellency Amissah Arthur has passed on. My condolence to his wife and children. RIP AMISSAH ARTHUR

Apparently our Vice President Amissah Arthur collapse during his early morning workout and was pronounced DOA at 37 military hospital.

If the above info is true, don't use it as an excuse not to work out, obesity is still deadly. Thanks?#RIP ?? pic.twitter.com/rjFcU4ZrSG