Celebrity performances & display of wealth at the Kumasi Royal wedding 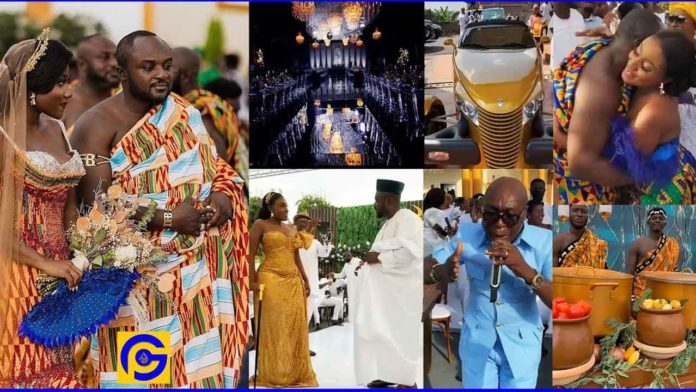 Over the weekend, the Chief Executive Officer of Adinkra Pie, Barima Osei Mensah and Anita Sefa Boakye tied the knot in a glamorous ceremony.

The ceremony dubbed the ‘Kumasi Royal Wedding’ was a three-day event which saw performances from top Ghanaian musicians.

The plush ceremony which started on Friday was the talk of the town as there was a display of the rich Ashanti culture during the engagement ceremony.

One thing that caught the attention of many was the visual themed 7-tier hanging cake that was displayed during the reception.

The bride, Anita Sefa Boakye who is the daughter of owner of the famous hotel in Kumasi, Anita Hotel changed into 10 different outfits for the ceremony.

See some photos below;

A thanksgiving all-white ceremony was held on Sunday at the forecourt of the Manhyia Palace.