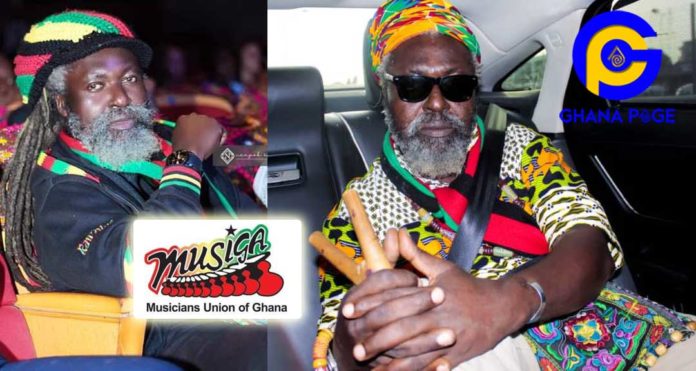 The seasoned Reggae musician Ras Caleb APPIAH-LEVI is a former member of ALPHA BLONDY and the Solar System. He is also the current president for PanAfrica-Ghana. He hosted Kenyatta Hill aka Culture Jnr, the son of legendary Jamaican reggae star Joseph Hill (Culture) and Mr. Georges Kouakou in Ghana on 2nd April 2019 in the name of PanAfrica Ghana.

Ras Caleb is the person who led a MUSIGA delegation to Kwamo, Ashanti Region to do a fact-finding mission on the state of Ghanaian rapper, Okomfo Kwaade and what the association can do to help him in 2018. The delegation also donated to Okomfo Kwaade who is battling with psychological problems and the rehab center where he is being kept.

Speaking to Ghpage.com after filing his nomination, Ras Caleb APPIAH-LEVI revealed that he is waiting for the vetting to take place in order to officially launch his campaign and begin his tour to explain to musicians and stakeholders in the industry as to why he should be given the mantle to pursue their interest.

“I will officially launch my campaign and brief Ghanaians more especially stakeholders in the music industry why I am the best person to take over from the current president, Bice Osei Kuffour (Obour)”, Ras Caleb stated.

“I will also be going on a tour to all the ten regions where the election will be held to explain my policies and plans for the betterment of this industry to every member of this association and potential members as well”, Ras Caleb added.

The current president of the Musicians Union of Ghana (MUSIGA) is Bice Osei Kuffour popularly known as Obour. He has served the association two terms in a role after he won the first election in 2011.

Obour’s administration has been embroiled in a series of allegations of corruption and neglect of musicians affairs throughout his second administration. But Obour insists he is the best thing to have ever happened to this industry.

The next MUSIGA elections will be held on 26th June 2019 through all the ten administrative regions of Ghana.