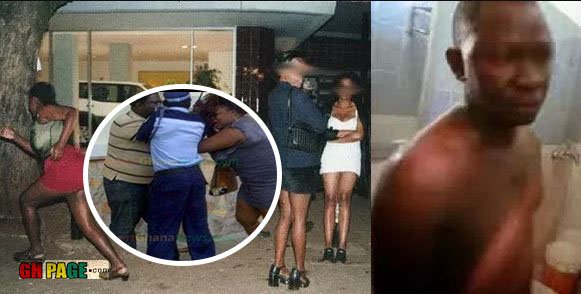 A drama unfolds as a couple reportedly bumped into each other on New Year’s Eve at a popular guest house in Zvishavane — each with a secret lover apparently heading for a lunch-time romp.

This dramatic incident has become the talk of the asbestos mining town started when the man only identified as Matapi, a tout at Mandava Bus Terminus went bonkers and brutally bashed his wife and her lover.

It is reported that, during the scuffle, the wife who seemed unperturbed that her cheating husband had bumped into her with a lover maintained her arms around her lover while urging him to fight back.

The man, Matapi is also said to be a regular customer at different guest houses in the mining town.

An eyewitness, James Mafa, said onlookers were left in stitches as the wife tried to plead with her husband not to embarrass them publicly.

Mafa said the man who apparently forgot that he, too, had betrayed his wife’s trust by sleeping around, rushed to attack her and her lover.

“Seething with anger he (Matapi) started beating his wife and her lover but fortunately there were people around who later restrained him.

However, things took an exciting turn when the two women also went for each other’s necks,” narrates Mafa.

He added: ”As if that was not enough, the two women went on to UnCloth each other while throwing nasty barbs at each other. The scuffle drew the attention of passersby and other customers who immediately bolted out from their restrooms to follow proceedings of the dramatic incident.

“From that day Matapi never reported for work and his wife is also said to have deserted their lodgings in Makwasha suburb.”

In a bid to bring to resolve the matter, workers at the guest house reportedly ordered the couple’s lovers to vacate the premises and leave the philandering husband and wife to sort out their problems.