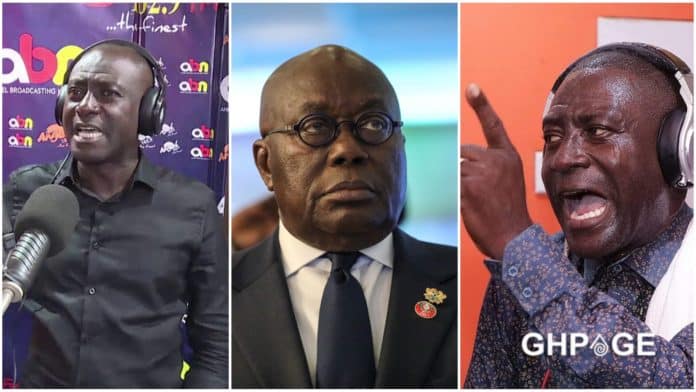 Earlier yesterday, Ghanaian broadcaster Captain Smart was arrested by the Nima Divisional Police for making statements on his show that threatened the peace and security of Ghana.

He was released a few hours following his arrest by the BNI after answering some questions about his infamous uprising comments that led to his detention.

READ ALSO: This is the video that led to the arrest of Captain Smart

The fearless and daredevil broadcaster has fired the people behind his arrest on this morning edition’s of ONUA TV’s Maakye Show.

According to Captain Smart, he won’t kowtow to the consistent intimidations from his attackers who are high profiled government officials.

He went on to add that, he won’t stop commenting on the social, economic, and security issues in the country so his detractors should brace themselves for the worse.

Pressing on his fire comments, Captain Smart boldly mentioned Nana Addo’s name and emphatically told him that he will continue to constructively criticize some of his policies as long as he’s alive.

READ ALSO: Captain Smart arrested; this is why

Captain Smart who sounded like an army general at the war front told his enemies to go to Hell for all he cares because even on his death bed, the Akufo Addo-led NPP government will continue to suffer from his never-ending criticisms.

The former ABN employee also accused the government of paying some Ghanaians to insult and taunt anyone who criticizes Nana Addo.

On the authority of Captian Smart, he’s yet to add more “pepper” to his attacks on the government and he doesn’t care if he’s arrested again.