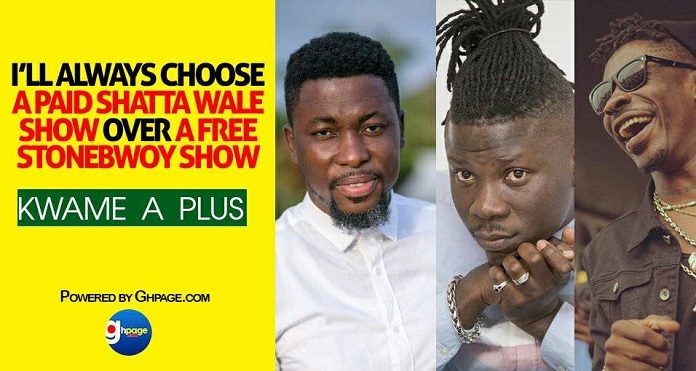 Controversial political musician, Kwame A Plus, has confessed his massive love for dancehall artiste Shatta Wale and admitted he will always opt for a paid concert from him rather than a free show by rival Stonebwoy.

According to Kwame, he has a heavy love for the SM4Lyf Boss and will always run to his defense in times of want and need. 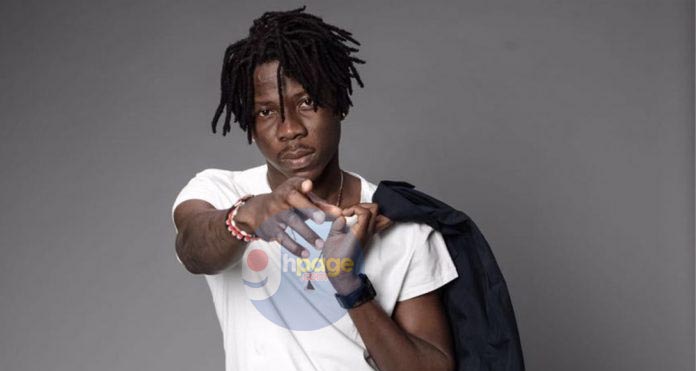 The well-known politician made this known when he made a post to express his opinion about the current dispute going on between Stonebwoy and Zylofon Media.

READ ALSO: 5 Things We Have Gathered So Far From The Latest Stonebwoy And Shatta Wale Beef

He condemned and spoke against the dispute because according to him, same could happen to his favorite Shatta Wale in the future.

READ ALSO: I never dissed Stonebwoy, I only cautioned him – Kumi Guitar explains

Kwame A Plus Wrote:

“We all be young guys. I know so many of my guys here wey they dey hustle fucking. They no get money but some dey manage footballers. Some dey manage artists. Bullet try so hard to make Ebony. The money was not there.

“It was purely hard work. Wey God bless am. Then someone made money and all of a sudden wanted to bail her and “take care of her.” He met this young brothers artist without his knowledge to try and cash in on his sweat. If you be Bullet will you be happy? Bullet did not get angry.

“Today your artist which you didn’t make, in fact he was made before you signed him wants to leave. Nobody is bailing him.

“He wants his freedom and you send tugs to attack him and take his car. Like seriously? Me I’m a die hard Shatta Wale fan. If Shatta is playing a show for 1 million and Stonebwoy is playing a show for free I will pay and go to Shatta’s show. Not because any of them makes the best or worse music. Just because I love Shatta. But I don’t judge blindly.

“I won’t do that. If I support what they did, one day they will do it to Shatta.They say I am a typical Ghanaian who wants people’s downfall. Ok cool. I hear. What do you call the guys who went to attack Stonebwoy? Do they want his “upstand”?