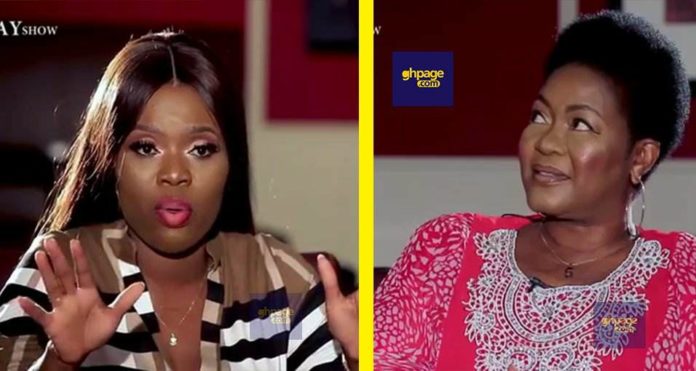 Kumawood actress, Christiana Awuni is considered the most heavily endowed when it comes to women in Ghana entertainment industry. She has shared her experience of how she ended up in Concert Party in those days.

Concert Party was one of the most entertaining programmed aired on Ghana Television and it’s still considered one of the most aired Tv programmes that nurtured almost all legends in our acting industry.

According to Christiana Awuni, she ended up as an actress in Ghana’s Concert Party after one producer of the popular tv show forced her to be part of the cast.

In her narration, she had attended one of the concert shows in Nima where she used to stay and after the show had ended, she was so enthusiast to join the musical band because she had a great passion for that. This made her wait even after everybody had left the hall.

“I was standing there after everybody had left and one of the producers approached me and asked why I was still standing there whiles everybody is gone? I told him I have interest in singing and would love to join the musical band but he insisted I join as one of the actresses,” she said.

“I told him am not interested in acting due to the misconception surrounding concerts at that time. But he kept on coming to my house to convince me to be part which I obliged in the end and here I am today,” she added.

read also: Christiana Awuni shares her experience when she went to Dr Obengfo

The concert party used to play a great role on the entertainment scene in Ghana and that is why they became very popular in those good old days.

One can vividly recall the heydays of personalities like Bob Santo, Judas, comedians like late Nkomode, Agya Koo, the late Bob Okala and groups like Bob Cole, Kwabena Onyina, Kakaiku and the Jaguar Jokers who were great crowd-pullers whenever they performed.

The concert party constitute what is described in literary terms as ‘popular theatre.’ Their contributions and importance on the entertainment scene in Ghana is tremendous and on the same level as conventional or western theatre, if not more.