Clash of the Slay Queens: Sista Afia, Efia Odo And Fella Makafui ‘clash’ In A Meeting(Video) 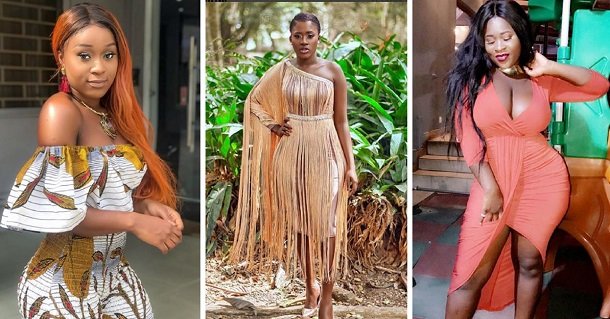 By now every social media user knows that Efia Odo and Fella Makafui are beefing. The beef is so dirty and ugly that unprintable words and names have been used on each other.

The feud between Efia Odo and Fella Makafui started when Efia Odo claimed Fella is a cheap girl who sleeps with politicians and other rich men in society for money and other material stuff. She even alleged Fella Makafui, the YOLO star actress has slept with Ghanaian rapper, Medikal, Sister Debby’s boyfriend and she is equally fake including her big butt.

READ ALSO: Serwaa Of YOLO Fame Punches ‘Mobile Money Girls’ – She Has This Advice For Them

However, from nowhere, Sista Afia, the Jeje hitmaker has jumped to the defence of the young actress, Fella Makafui. Throwing shades at the US-based Ghanaian actress, Efia Odo, the singer accused her of sleeping with every man she encounters. She also alleged Efia Odo is a thief who recently stole GH400 from one of her boyfriends she recently visited.

We posted this morning that actress Efia Odo has called for peace to reign and allow love to lead as this feud will benefit them nothing. In a video posted by the ‘Heels and Sneakers’ actress, she apologized to Fella Makafui for all the insults and false spoken statement aimed at damaging her image.

READ THIS: Another popular musician will die before April ends – Prophet Nigel Gaisie

In a video spotted by GhPage.com, the three entertainers ‘clashed’ in a meeting with movie maker, Kofi Asamoah with the purpose of briefing the actors about his yet-to-be-shot movie.

All characters for the film were to be present for the discussion thus Sista Afia, Fella Makafui, and Efia Odo could not absent themselves. Fella Makfui who came in late met the two Afia’s seated already with John Dumelo, Tracey Boakye, Salma Mumin, James Gardiner, Toosweet Annan, Obrempong and Charlotte Derban.

READ THIS: Video: Agya Koo Stopped Working With Me Because I Turned Down His Proposal – Louisa Adinkra