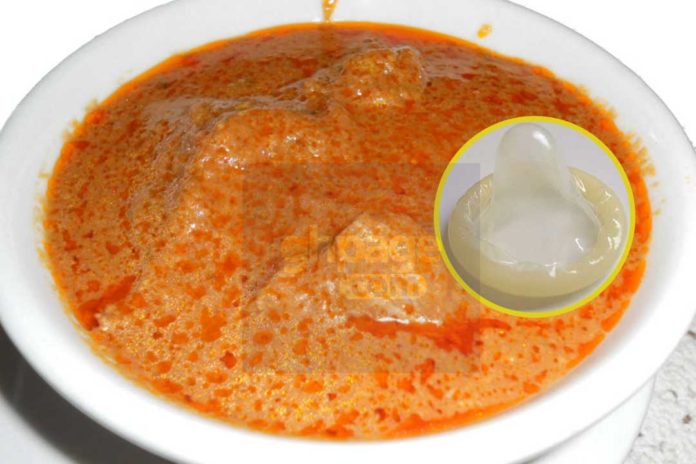 A resident from Salamba a suburb in Tamale metropolis is yet to come out of shock as to how a used condom found its way into his groundnut soup while he was about to eat.

The incident which occurred in one of the respected homes in the area shocked residents as they wondered how such an act could occur in a very serious religious home.

According to sources, it is a common practice for the youth in the area to relax under sheds in the afternoon to keep themselves from the scorching sun and to share their meals together.

The source revealed that on the day the incident took place, the wife of one of them prepared rice balls and groundnut soup and served her husband at who was, as usual, sitting at the place with his peers.

He went on to add that the husband and his friends had eaten lunch already brought by wives of the others, they decided to wait for a while before eating the rice balls which was agreed by all.

Hours later, they all felt hungry and decided to consume their rice balls with groundnut soup but no sooner had they started than one of them pulled out a used condom from the soup.

This sent the most of them vomiting while accusing the young man of conspiring with his wife to poison them.

The man who could not stand the embarrassment showered on him by his friends also dashed to the house and subjected his wife to severe beatings.

It was while they were quarreling and shouting on top of their voices it attracted the attention of some residents who came to the scene describing the act as barbaric and sacrilegious.

Onlookers saved the poor women from being lynched by relations of the man who accused her of trying to bewitch him despite expressing her innocence about the matter.

It was disclosed that the woman has since vacated her matrimonial home for her own safety while efforts are underway by some religious leaders to patch up the differences.

Also Read: A Plus blasts Rev. Mensa Otabil over his involvement in GHC 610 million saga

Husband of the accused will not comment further on the matter than say “it is not a matter for the press”.

All attempts to talk to the worried woman and her relations proved futile as they have resolved to keep mute on the matter and resort to mediation from ranking religious leaders to have her return to her matrimonial home.

SEE MORE: Patapaa promises to sleep with Xandy Kamal at the right time