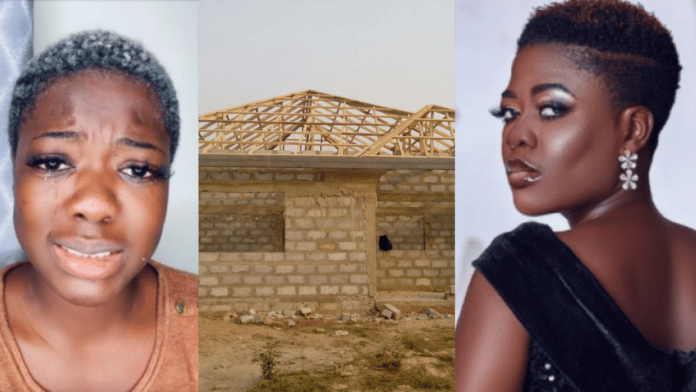 The building contractor who has allegedly duped Tiktok star Asantewaa to the tune of 3 billion has spoken for the first time during a phone-in interview with blogger Sika Official.

According to the building contractor who is the husband of Eyram, the baby mama of YOLO’s Aaron Adatsi cousin he has never duped the Tiktok star as the news in the media suggests.

In the trending audio, he accused Asantewaa of trying to tarnish his image and hard-earned reputation by spewing terrible lies about him.

He also lamented over how Asantewaa tried to get him arrested by conniving with a high ranking police officer although he’s innocent and has never spent her money.

Listen to the audio below to know more…

Amidst all this, there has not been an official statement from Asantewaa herself. Obviously, he trying to get her money back from the contractor behind the scene devoid of social media drama.

Asantewaa cries after being duped of Ghc 300,000 by building contractor

Ghanaian TikTok star Asantewaa has allegedly been duped by a building contractor to the tune of Ghc 300,000 which is equivalent to 3 billion old Ghana cedis.

According to reports, Asantewaa had plans of moving into her own house by the end of this year but unfortunately, the money she invested into the project was being used for other purposes by the contractor.

According to gossip blog Tutugyaguonline, Eyram, the baby mama of YOLO’s Aaron Adatsi was the one who introduced Asantewaa to the contractor whom she claimed is her cousin’s husband. READ MORE HERE