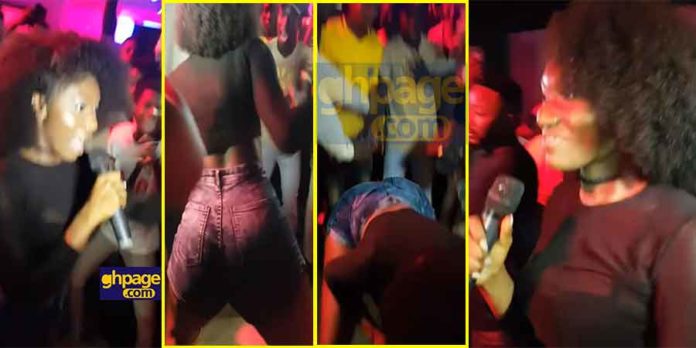 Singer Wendy Shay is currently being trolled by some social media in what they see as a direct copycat of the late Ebony Reigns.

The artiste performed at the YP Freshers House Party yesterday and in a video posted by an Instagram, user @Konkonsa —attracted a lot of comments from people who seemingly share the same opinion.

The songstress was dressed in a tight jeans shorts which she matched with a black long sleeves lace crop top and could be seen winding and twisting her waist as she performed her hit track, uber driver.

That move, many of the commentators believed that was a too much of a copycat from the late dancehall performer, Ebony.

@tillymat02 said; “This dance be copy copy of the late Ebony

@______siri wrote; “Dancing like ebony with her unmovable wig”

@dellarussel added; “She can’t create her own unique identity? She seems to be copying late Ebony”

@3_clement was telling @tillymat02 to leave her alone; “yieeeeee so when will this end?????. Everything ebony ebony make the queen rest in perfect peace and make Wendy have peace kakra abbaaaa“

@sarat._supported; Ghana Comparison Association allow the girl to be great ????

@fantasares added; “Please nothing can bring Ebony back. Allow this girl to shine wai.”

The Rufftown records act Wendy Shay is striving to carve a niche for herself but seems some fans are not buying that.

Since Rufftown Records signee, Wendy Shay released her hit single, Uber Driver, many people have compared her style to that of late Dancehall artiste, Ebony Reigns.

READ ALSO: Wendy Shay shows off her mansion and cars

Even though she has released two more singles; Bedroom Commando and the latest Astalavista and has shown she is doing her own thing, it seems she cannot escape the constant comparison to the poison star.