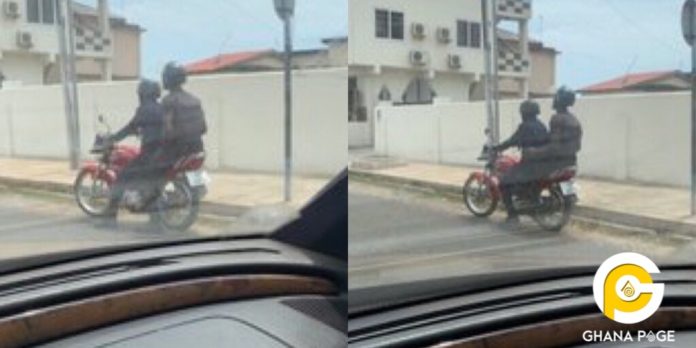 Corruption and abuse of power is undoubtedly a social canker in our part of the world. Each day, Ghanaians are faced with unique cases of public officials blatantly demanding money to perform their duties.

They sometimes go to the extreme extent of harrassing and tormenting innocent citizens just to extract money from them for no reasons whatsoever.

GhPage has chanced upon one of such stories of blatant abuse of power, illegal seizure of a driver’s licence and extortion in a post on Twitter. It reads;

“So about 2 hours ago at 12:13noon on my way to my appointment with companies,I was stopped by these two police officers on this Motor Bike with plate number GP-4896 without ID cards,they asked for my license and snatched it from me and bolted away”

We then approached the victim who agreed to give GhPage.com the details of this encounter.

Our very reliable source who has chosen to remain anonymous for the fear of being victimised and attacked narrated his harrowing ordeal with some police officials who flauted their office and used their position to try to extort money from our source who had no plans of giving money to these corrupt officials.

Narrating his ordeal, the young SSNIT compliance officer who was the unfortunate victim in this case of illegal seizure of driver’s licence and extortion said;

“So today on my way to appointments with four companies in Osu, I was using the linking road which takes you to KFC on the Oxford street.
There were about three cars in front of mine which were Uber cars so the next thing I realized was, these officers stopped with their bike in front of mine then proceeded to the side of my car and asked that I roll down.”

He did just as they asked then the most unexpected thing happened. Narrating the incidence he said;

“So I did that and they asked for my licence and because of past experiences I showed it to them from inside the car and the one riding stretched his hand inside my car and snatched it from me. They asked me to follow them to show me the sign which says it’s a ONE WAY LANE. I did that and I asked them that if it’s a one way lane why are they stopping only me and ignored the other cars before me, why is it because I’m sitting in a Benz?“

Trying to understand why his licence had been snatched he inquired from them why they had taken his licence in such a manner. He further narrated;

”I went further to ask them to give me back my licence since they don’t have to take it away from me.”

According to him, these Police men then reportedly demanded for money to return his licence.

“They said I should either sort them or move to the station with them. I said No way I have no money and they should let me have my license before. All along the companies I was supposed to visit were waiting for me so I told them that I beg they should let me go and work, I’ll come after. They insisted that I should sort them or go to the station.”

The gentleman decided that he was not going to take part in this very annoying situation. He walked out on them a got into his car and took pictures of them and their motorcycle’s plate number.

“Then I angrily walked to my car and picked up my phone and took pictures of them, that was when the rider turned and saw me and the next thing I saw was that he had sped off.”

“I also started my car with the intention to get to them only for me to get to the T-Junction in front of Hot Gossip and they were gone.”

This is how some some unscrupulous policemen tried to extort an innocent citizen for no reason whatsoever.

When asked what actions he had taken the young man disclosed that he intends taking legal actions against these policemen, he said;

This is a typical scenario some Ghanaians face in the hands of officials who have taken the laws into their own hands and are terrorzing innocent citizens each day.

We urge the Ghana Police service to launch a full scale investigation into these Police men and ensure that they are dealt with.

The story continues to unfold, keep visiting GhPage.com for prompt updates on the developing story.